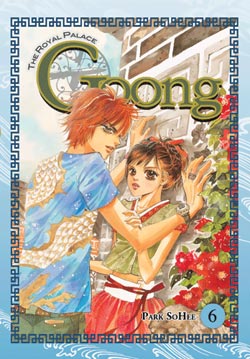 Goong, Vol. 6 | By Park SoHee | Published by Yen Press – Convinced that the royal couple’s relationship will improve if they consummate their marriage, the elders trap Chae-Kyung and Shin together overnight, hoping to create a romantic mood. Unfortunately for them this just makes things worse as Shin’s stubbornness causes him to let Chae-Kyung go on believing that he does not care for her and she has too much self respect to lose her virginity under those circumstances, regardless of her own feelings. Confronted by Yul the next morning, who pulls Chae-Kyung in for a hug that is too close for either her comfort or Shin’s, Shin buries himself further by piling on insults and hurtful comments that only cement Chae-Kyung’s pain and feelings of disgust. Not that Yul is in any better position with her by the end of this volume. Though Yul arranges for Chae-Kyung to visit a sick family member, his confession of love only helps open her eyes to his darker motivations, further proving to her that the royal family is one seriously screwed up bunch and making her own unrequited love even more painful as a result.

This volume is a fairly astounding example of just how much damage can be done by simply refusing to be honest about one’s feelings. Though Chae-Kyung is definitely holding things back at this point out of sheer humliation, the real culprit here is Shin, whose inability (still) to admit that he missed Chae-Kyung when he was on his trip to England (or to return a single one of her calls during that time) is largely responsible for building up the veritable ocean of misunderstanding, resentment, and paranoia sent spiraling like a hurricane throughout this volume. Chae-Kyung’s level of insecurity in her relationship with her husband has been built up almost calculatedly by Shin himself, though he seems oddly perplexed at the inevitable consequences of his words and actions.

That Chae-Kyung has a temper of her own is undeniable, but as the fish out of water in this world, she’s got a lot more of my sympathy than anyone else. It’s too bad that Shin hasn’t been able to muster any of that himself. it’s maddening to watch him thinking things that, if only verbalized, would change everything between them. Not that he’s significantly different than most teenaged boys, but the amount of power he wields in his position (particularly in their marriage, where traditional chauvinism is practically enforced by the state) magnifies his typical teen boy issues along with everything else in their lives. “Does the royal family begin their education at birth?” Chae-Kyung asks tearfully after their confrontation with Yul. “Is that when you learn to hurt people deep down in their souls? Do they teach you how to damage someone’s pride?” Though it is gratifying to hear her say these words out loud, they seem to have had little effect as of yet.

If the two previous paragraphs are not proof enough of how caught up in this series I’ve become, I’ll offer more. Though I found this volume intensely frustrating on an emotional level, I’ve paused several times while writing this review just to reread large sections of the book–not because it was necessary for the review but because that’s how easily it is able to lure me right back in. Not only is the story entirely addictive, but Park SoHee’s artwork remains a favorite of mine among manhwa artists with all its intricate detail, not only in the gorgeous traditional gowns and headdresses so common in this series but also in the characters’ modern-day hairstyles and clothing choices.

I’m an emotionally-driven reader, which often leads me to gloss over visual details as I rush through from one heart-wrenching moment to another, gobbling up the story like the delicious confection it is. The art in this series, however, makes me want to take my time poring over each panel. These two impulses battling each other all through the volume is probably more humorous than anything else, but I think it also is a great illustration of just how enthralling this series can be on both visual and emotional levels. Though I could still do without the manhwa-ga’s weirdly unattractive chibi art, at least this volume is very low on Eunuch Kong, who apparently has a life-long secret that may actually render him as something more than a tasteless running gag.

Fans of romantic shojo manga who haven’t quite caught the manhwa bug would do well to start with a series like Goong. It is smart, dramatic, funny, and just a little bit trashy in the very best ways.