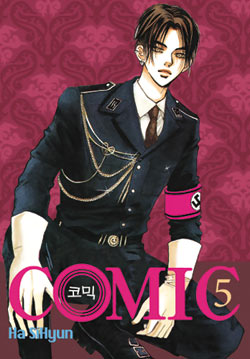 Comic, Vols. 4-5 | By Ha SiHyun | Published by Yen Press | Rated Teen – Spunky high school student Alice Song wants to be a manhwa artist and is thrown suddenly into the professional world when she wins third prize in a national contest held by a popular magazine. Alice’s excitement quickly dims once she realizes how far she really has to go, but she finds encouragement from an unexpected source—Patrick “Saturn” Kang, an arrogant, moody professional who happens to attend the all-boys high school next to hers. Their initial encounters are less than successful, but after quite a number of arguments, mishaps, and misunderstandings, Patrick agrees to take Alice on as his assistant to help her improve her craft.

In volume three, with Alice’s girlhood crush, Mr. Hwang, temporarily out of the picture, it looked like Alice and Patrick might finally figure out they like each other, but as volume four begins, Alice’s manipulative friend Daria has decided she wants Patrick for herself and begins scheming to push Alice out of the way. It takes nearly two volumes for Patrick to see through Daria’s designs and decide to confess his feelings for Alice, but even then, Daria manages to get the upper hand and twist things her way, leaving Alice devastated by the end of volume five.

Despite the drama and anticipation of Patrick’s confession, volumes four and five hit a low point in the series. Though the romantic leads are both appealing and it’s fun to watch them discover their feelings for each other, Daria’s outrageous machinations are just plain tedious and steal too much focus from the story’s real appeal—Alice’s journey to becoming a professional manhwa-ga—which is all but invisible in these volumes.

With its energetic, attractive art and idiosyncratic characters, Comic has the potential to be both entertaining and romantic while also offering an enticing glimpse into the world of aspiring young manhwa artists. Hopefully over the next few chapters it can pull itself out of the romantic dregs and restore the balance that made its early volumes so much fun.