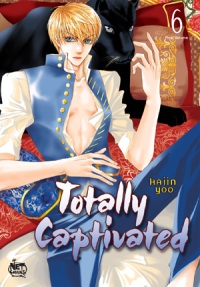 Totally Captivated | By Hajin Yoo | Published by NETCOMICS | Rated 16+ – Ewon Jung is a 23-year-old scholarship student in Seoul, whose curiosity over whether or not it is possible to have great sex without love (“It was possible.”) leads him to cheat on his boyfriend, Jiho. Devastated and yearning for revenge, Jiho persuades his new boyfriend, a small-time loan shark named Mookyul Eun, to force Ewon into service at his office where he is expected to run errands, clean, and balance the books, all without payment. Unfortunately for Jiho, Mookyul soon develops an interest in Ewon, and it isn’t long before Jiho ends up shunted aside once again. Mookyul is controlling and occasionally violent, and Ewon is far from a pushover, but they eventually reach a mutually beneficial arrangement and begin living together. Things do not continue peacefully for long, however, as Ewon becomes aware that he is falling harder for Mookyul than he intended and experiences his first real taste of jealousy. Though the story’s premise initially seems contrived, its real function is to provide a stylish, humorous background to what is essentially a very moving story about two deeply damaged men learning how to love.

In volume five, Ewon finally broke off his tumultuous relationship with Mookyul, unwilling to continue as his lover while Mookyul was still providing sexual favors to his company’s CEO—a man who had long ago rescued a young Mookyul and raised him as his own child. Unable to withstand the separation from Ewon, Mookyul confronted his father figure, breaking all ties with him and his company, and as volume six begins, he sets out to find Ewon and win him back. Ewon consents, but their reunion is short-lived, as Mookyul’s former business rival sets up a plot to ruin him now that he is no longer in the CEO’s favor. Mob madness ensues, Ewon is kidnapped, Mookyul is injured, Mookyul disappears, Ewon runs away, all leading up to the real drama of the volume, in which Ewon begs Mookyul to leave him so that he may be free of the constant terror of losing him. This is the real crux of the story, and ultimately provides the emotional payoff for the series.

It has been hinted throughout the series that Ewon’s absent parents were likely still alive, and this is finally confirmed in volume six, along with the sickening story of how he was abandoned as a child in the middle of the woods, essentially left to die. It is interesting to note that while both Ewon and Mookyul have serious abandonment issues, they have learned to deal with them in completely different ways. While Mookyul grew up to become controlling and possessive, determined to cage anything that might run from him, Ewon learned to avoid any real human connection, carefully protecting himself from the possibility of ever being abandoned again.

One of the things that has always been refreshing about Totally Captivated is that it is not a coming-out story. Ewon never agonizes over or apologizes for his sexuality (something he’s been aware of since the sixth grade), and he is completely comfortable with himself and unusually self-aware for his age. He knows what he likes and who he is sexually, and is completely up front about that with his partners (as they generally are with him). The dramatic benefit of this is that instead of having to focus on the characters’ feelings about being gay, the story is free to explore much further. Though the series does not shy away from the characters’ sexuality, its real focus is on emotional intimacy, and it is this that drives the story forward, especially in the final volume.

This series also avoids the thinly-veiled homophobia that is paradoxically present in so much of the boys’ love genre. “I don’t want some stinking homophobe to buy me a drink,” Ewon says to a co-worker early on in the series, and this attitude is never compromised at any point. The story never avoids specifics about the characters’ sexuality, neither does it portray its primary relationship as “forbidden love” nor insinuate that it is fundamentally inferior to heterosexual love—themes that are unfortunately common in many popular boy’s love stories.

Thankfully, this volume is free of the one discomfiting boys’ love cliché that is too often present earlier on, namely Mookyul’s habit of bullying Ewon for sex that is more frequent or rough than he is comfortable with (made tolerable only by the fact that Ewon proves many times over that he is capable of extracting himself from any situation he truly does not want to be a part of). After some shaky moments in the middle of the series that came uncomfortably close to romanticizing Mookyul’s controlling (even sadistic) tendencies, volume five brought Ewon back into control (despite the fact that he still calls his lover “boss”), with the two men finally reaching equal ground in volume six. Considering the extensive damage both Ewon and Mookyul bring to the table, it’s not surprising that they would fall into unhealthy patterns with each other as their relationship develops, but rooting for them became difficult during those middle volumes while the relationship was clearly abusive. With this in mind, volume six is a balm for the reader, as both characters shed their most destructive habits and are finally able to provide the emotional security each other requires.

The character designs in this series have never been anything special, but with characterizations so strong, they almost don’t have to be. What is lacking in design is made up for in substance, and though more distinctive art would certainly enhance the story’s effect, the series is not gravely damaged without it. The visual storytelling is clear and easy to follow and if the designs are merely serviceable, they at least do not get in the way. All the characters are visually expressive when they need to be, and many are downright poignant, particularly Ewon’s ex, Jiho, and his long-time friend, Dohoon Moon, who puts aside his own feelings to protect Ewon when he most needs it.

In its early volumes, Totally Captivated was smart, sexy, and fabulously dramatic. Now at the end of its final volume, it has also grown into an unexpectedly satisfying love story, rivaling the best of its genre.