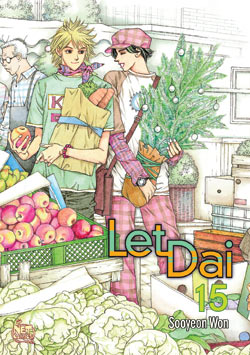 Let Dai, Vols. 1-15 | By Sooyeon Won | Published by NETCOMICS | Rated 16+ – Jaehee Yoo is a smart, responsible high school sophomore whose life is changed forever by a single chance meeting. One afternoon in Seoul, Jaehee spots a group of young gang members mugging a girl. He attempts to intervene, and is soon introduced to the leader of the gang, Dai Lee, a cruel, seemingly conscienceless boy to whom he is inexplicably drawn. After several increasingly violent encounters, Jaehee finds himself being initiated into the gang and falling into an obsessive romantic relationship with Dai. As others in his life are drawn into Dai’s world and the suffering that inevitably brings, Jaehee struggles between his obligations to friends and family and his bond with Dai, against which he feels increasingly powerless.

Let Dai is ridiculously melodramatic, unrelentingly violent, borderline misogynistic, deeply implausible, and an incredibly compelling read. The first chapter begins with the narration, “Love was like a banquet of pain,” setting the story’s melodramatic tone from the start, but this is not a bad thing, by any means. Sooyeon Won’s sense of drama and flowery language is one of the series’ greatest charms, capable of reverting even the most jaded adult woman back to her thirteen-year-old self. Won is Emily Brontë, E.M. Forester, and S.E. Hinton all rolled up into one tragically romantic girl-pleasing package. Outside the hazy, love-drunk filter of the series, Jaehee and Dai would almost certainly be unbelievable as real-life boys, but they are so lovingly and richly written, it hardly matters. Even in the final volume, as the story’s delinquent heroes are discussing F. Scott Fitzgerald and Pablo Neruda, reciting poetry, and declaring, “It’s just like the way I love you,” to each other while bicycling attractively over a forest path, it’s impossible to stop reading.

Much is made of Dai’s impact on Jaehee’s life and the lives of those around him, but the character who actually changes the most over the course of the series is Dai. At the beginning of the story, he is written as a classic sociopath. He has no regard for his safety or the safety of others, no remorse, no empathy, no tolerance for compassion, nor does he see any value in those qualities. He is unapologetically cruel, and feels no responsibility for his own actions or desires. It is desire, however, that ultimately forces him to grow. On several occasions, Dai declares that he will not forgive Jaehee for choosing to help or fulfill a commitment to someone else, yet eventually he must in order to come back to Jaehee, whom he appears to genuinely love.

Dai’s growth is slow and sometimes deceptive. For instance, at one point he arranges to have his former gang brutally beaten in front of a girl whom they gang-raped in a questionable attempt to make amends. Of course, this action’s true aim is to free Jaehee from guilt over the incident so that he can (according to Dai’s logic) be released from his obligation to the girl and commit himself more fully to Dai. Still, there are real changes in Dai as the story goes on, as he is forced to learn to respect Jaehee’s hopes and feelings and how those extend to people other than himself.

If Dai’s journey is about learning to accept the needs of others, Jaehee’s is about learning to accept himself. Strangely, though the entire series is filled with narration in which Jaehee talks about how tragic and painful Dai’s influence on his life will be, for the most part Jaehee appears happier in his life with Dai than he was before. Yes, he’s hurt people and experienced loss, and he’s certainly felt a great deal of pain over how their relationship is received by others, but he admits more than once that he doesn’t like the parts of himself that are selfless and reliable, and is genuinely thrilled with the freedom he feels when he is with Dai. It may seem odd to support a character’s quest to become more selfish, but in this case, there is a sense that if the right balance can be found, Dai can teach Jaehee to live more for himself and for the moment, and Jaehee can teach Dai to feel responsibility for others. It is this, more than anything, that makes it possible for the reader to continue to root for the relationship even as other characters are being hurt in the process.

While the story’s initial approach to its primary relationship is filled with dire warnings of pain and suffering that hover dangerously close to homophobia, Jaehee’s appeal for his mother’s acceptance of his sexuality later on in the series is very nicely written. The author unfortunately clings to Jaehee and Dai’s obsessiveness as a bit of a crutch, allowing them to repeatedly express their devotion to each other without quite admitting what that means. Both characters claim that the gender of the other “doesn’t matter,” and their on-screen sexual relationship is surprisingly chaste. Still, Jaehee’s plea for understanding and the arguments made against it by Jaehee’s mother will be sadly familiar to many gay teenagers (and adults) who have come out to their parents, and the eventual resolution between them feels very genuine.

Despite the all-consuming quality of Jaehee’s relationship with Dai, Won manages to maintain a good-sized cast of fully realized supporting characters as well. Standouts here are Eunhyung Song, Jaehee’s almost-girlfriend whose traumatic encounter with Dai’s gang breaks her in ways from which she will never recover, and Naru Hagi, a carefree, narcissistic classmate of Jaehee’s who lends an unexpected warmth to the series. Both of these characters are just as richly developed as the two leads (perhaps even more so in the case of Eunhyung) and their personal stories are incredibly compelling.

If there is one truly regrettable thing about Let Dai it is the story’s treatment of women. It can be unfair to assume that a character’s attitudes reflect the author’s, but Dai’s hatred of women is so pronounced it is difficult to ignore. Dai is first introduced beating up a high school girl, and things go downhill from there. Certainly his character is complex and deeply troubled, and the author does not mean to suggest that his actions are okay, but it does appear that she means them to be romantic, or at least attractive on some level, which is difficult to swallow. Misogyny in stories written for women is incredibly disturbing and far too common in boys’ love, and as fantastic a read as this story is, it comes uncomfortably close to crossing that line.

NETCOMICS’ online distribution of Let Dai is a pretty good deal for those who aren’t keen on re-reads (about five dollars total to view all fifteen volumes) though the quality of the scans could stand improvement. Much of the text is difficult to read at the lower of the two available screen settings, and some is virtually unreadable in either setting, particularly the frequent sections that feature gray text (lightly outlined in white) on gray or textured backgrounds. In another comic this might be an insignificant problem, but the large blocks of narration that continue throughout Let Dai make the quality of the text paramount.

Sooyeon Won’s art is beautiful, and her characters burst, lifelike, from the page. Even the darkest, most violent moments are aesthetically pleasing. The visual storytelling is very clear and easy to follow, only hindered by the quality of the onscreen reproduction of the text.

Complete in fifteen volumes, Let Dai stands out in a market flooded with one-shots and short series that can never achieve the same impact as an epic tale well told. Regardless of any complaints that can be made, this story is riveting from start to finish, visually appealing, and intricately crafted to please its target audience.