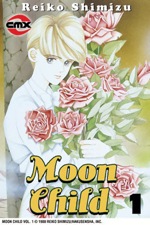 It’s a sad day in manga fandom when the publisher brave enough to bring us Reiko Shimizu’s Moon Child is forced to close its doors.

Does that seem like a strange reaction to today’s unfortunate news? Perhaps it is. It was, however, my very first thought when first heard of DC Comics’ plans to shutter CMX in just over a month.

I was first introduced to CMX Manga via Shaenon Garrity’s fantastic Overlooked Manga Festival, where she talked about (you guessed it) Moon Child. This was not only my first exposure to a CMX title, but also my first real insight into just how gorgeously cracktastic classic shojo can be.

It was a revelation. It was as though someone had rifled through the leftovers of my rusty, once-teenaged mind, delighted in the sci-fi-laced weirdness it found there and said, “I’ll do you one better!” That a series like this existed at all was enough for me to revel in, but the fact that someone had translated it into English? That was like a real-life gift from an imaginary deity.

It is this memory, more than anything, that drives my mournfulness on this day. Sure, I’m anxious over the future of Swan and From Eroica With Love, and of course my heart is breaking for yet another group of dedicated, talented professionals who are soon to be out of a job. But from a personal standpoint, in my heart of hearts, I’m devastated to know that Moon Child will now become officially out of print.

On a less personal note, this is easily the worst news we’ve had yet in the latest bit of industry bloodshed, or at least the most decisive. It’s interesting to note, however, that most of the talk from bloggers I’ve seen so far has placed the blame for CMX’s demise, not with the economy, but with DC. Even the always-tactful Brigid Alverson has made no bones about her feelings on the matter. ETA: Here’s a must-read from David Welsh, too.

It’s worth remembering, I suppose, that as one shojo giant falls another rises up. Meanwhile, I’ll drown my sorrows in a glass of wine and a volume full of crazy, alien fish-people.

For news, check out my post at Examiner.com. For nostalgia, here are my reviews of Moon Child, volumes one and two.