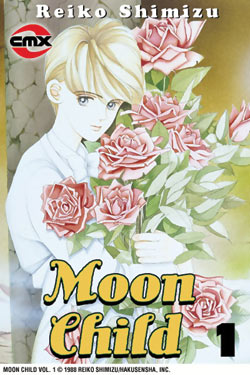 Art is an aspiring Broadway dancer, struggling to live up to the expectations set for him by family and friends who viewed him as a child prodigy. Deep in the middle of a slump, things are made worse when he ends up in a car accident that injures him. Also involved in the accident was a young boy who, while otherwise uninjured, appears to have lost his memory. Feeling responsible for the boy’s condition, Art takes him in, but it soon becomes clear that the boy (named “Jimmy” by Art) is not normal. Jimmy can move objects around with his mind, frequently involuntarily, and his presence sometimes causes people to see strange apparitions.

I was inspired to pick up this series by Shaenon Garrity’s Overlooked Manga Festival, but even her fantastic (and hilarious) write-up did not fully prepare me for its bizarrely complex plot. So much is introduced just in the first volume (I haven’t even mentioned the mysterious identical twins who come down to talk to “Benjamin,” or the fact that the apparitions are mostly gigantic, terrifying fish monsters) it’s a bit overwhelming to imagine what’s to come, but it’s so intriguing in all its cracktastic glory, I can’t help but feel anxious to continue. Though the story suffers from too much plot and the usual, quirky, manga misconceptions about American culture (most of which, aside from the stunningly racist portrayal of Grandma, are no more than funny) the characters’ personal stories are honestly riveting, and it is this that makes Moon Child more than just a fascinating look at how weird shojo manga can be.

The heart of this story, at least in the first volume, is in Art and Jimmy’s relationship, though it is a fairly twisted one in some ways. Though they are undeniably drawn to each other (Art leans on Jimmy as the only person who still believes in his talent, and Jimmy is very obviously infatuated with Art), they are also a destructive force in each other’s lives. Art has a temper which he does not effectively control, resulting in violence more often than not and when Jimmy says to someone else mid-volume, “No, I’m fine. I’m accustomed to being struck,” it’s a pretty horrifying moment. Jimmy’s confused feelings about Art–both wanting to help him and wanting to keep him for himself–cause him to act on some strange impulses, first begging Art’s bitter ex-girlfriend to come see him and then rejecting her immediately when she does. Jimmy’s lineage causes quite a bit of trouble, too, as the strange ghosts and apparitions he brings with him affect those around him. Yet somehow, I found myself rooting for these two to stick it out and make some kind of life together as father and son, older and younger brother, fish and lover–whatever–though it’s difficult to explain exactly why. I suppose I’m drawn to the ways in which they need each other and I’d like to see a couple of lost souls find a comfortable home.

Other interesting characters include Holly, Art’s seemingly cruel ex whose story has only been half-told; Shona, the fated lover of Benjamin who just wants to be a good mer-man and spawn with a pretty fish; and Noera, a mermaid who falls for Shona despite the fact that he’s fated for someone else. By the end of the first volume, I am compelled to move forward as much by a desire to find out more about these characters as I am by the promise of awesome weirdness, which is a great testament to the mangaka’s ability to create something solid inside a wacky package.

Though its odd, scattered premise makes it difficult for me to heartily recommend this series just one volume in, I can at least promise that volume one of Moon Child will not leave anyone bored. With aliens, mermaids, horror, romance, mystical prophecies, and even tales of Broadway show people, Moon Child truly offers something for everyone.