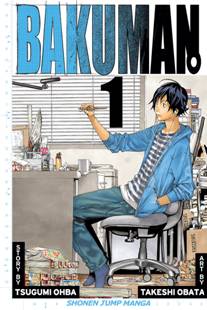 Everybody knows what a big Takeshi Obata fangirl I am (or at least they should), and it’s no secret that I’ve been anxious for the US debut of Bakuman, his latest collaboration with Tsugumi Ohba, author of Death Note.

Finally that day has come! Not the first volume (we’ve got a ways to go for that), but in the May issue of Shonen Jump, available now at an otaku-friendly newsstand near you. Check out the press release from Viz:

San Francisco, CA, April 14, 2010 – VIZ Media, LLC (VIZ Media), one of the entertainment industry’s most innovative and comprehensive publishing, animation and licensing companies, has announced the upcoming release of the manga series BAKUMAN。. The series, rated ‘T’ for Teens, will be released on August 3rd under VIZ Media’s popular Shonen Jump imprint and will carry a MSRP of $9.99 U.S. / $12.99 CAN. Previews for the series will start to run in the May 2010 issue of VIZ Media’s popular monthly manga anthology – SHONEN JUMP magazine which is on stands now.

BAKUMAN。is written by the author of DEATH NOTE, Tsugumi Ohba, and the artwork is by Takeshi Obata, the artist known for series such as DEATH NOTE, HIKARU NO GO and RALΩGRAD. The story follows average student Moritaka Mashiro, who enjoys drawing for fun, but when his classmate and aspiring writer Akito Takagi discovers his talent, he begs Moritaka to team up with him as a manga-creating duo. But what exactly does it take to make it in the manga-publishing world?

In the opening volume, Moritaka is hesitant to seriously consider Akito’s proposal because he knows how difficult it can be to reach the professional level. Still, encouragement from persistent Akito and the motivation from a girl he has a crush on help push Moritaka to test his limits!

“BAKUMAN。is an outstanding, behind-the-scenes manga about manga, and the artists who create it, written and drawn by the creative team that produced the DEATH NOTE series,” says Elizabeth Kawasaki, Senior Editorial Director at VIZ Media. “The series is a great read for all manga fans, and especially fun for aspiring artists.”

Born in Tokyo, Tsugumi Ohba is the author of the hit series DEATH NOTE. The writer’s current series BAKUMAN。is serialized in Weekly Shonen Jump in Japan.

For more information on this title, and other Shonen Jump titles, please visit http://shonenjump.viz.com.

You can catch more of my Obata squee by reading my reviews of Hikaru no Go. Now, for the long wait until August…