Here’s an interesting press release that made it into my inbox today, from Japanese BL publisher Libre (via Animate U.S.A.), who are releasing English versions of several of their titles for the Kindle. See the full press release below: 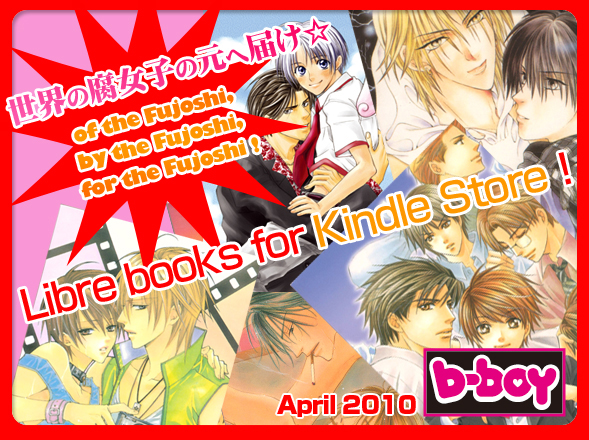 TOKYO, JAPAN – APRIL 13 – Animate U.S.A., Inc. is very pleased to announce that English versions of Libre books have been released for the Kindle Store on Amazon now!

“We would like to express our thanks for our fans’ loyal patronage. We’re very, very excited about the fact that our fans all over the world will be able to enjoy our books,” said Takao Iwakoshi, President of Libre Publishing, Co., LTD.

The following 4 titles are released in April, and over 4 titles a month will be released after that. Animate U.S.A., Inc. will keep fans informed about the release schedule for each title on its website, www.animate-world.com, www.b-boy.jp.

About Animate U.S.A., Inc.
From North to South, it’s by far the largest chain of Anime shops in Japan! Character goods from anime, manga, game, comics, game, as well as art supplies… You name it! All anime/manga-related merchandise is available! Additionally, you can find original Animate goods, specials, etc. Furthermore, we have special events such as autograph sessions, panel discussions, campaigns, and more! Come to Animate filled with ‘Dreams’ and ‘Hope’!!
See http://www.animate.co.jp/ for more information. (Japanese site)

About Libre Publishing Co., Ltd.
The biggest BL publisher in Japan. The company name “Libre Publishing Co., Ltd.” is taken from the Latin base “Lib” which can mean “Book” or “Liberty.” Such is the aim of our company, to be able to share this love of “books” and “freedom” by the unique contents of the works that we offer, for the enjoyment of our readers. See http://www.libre-pub.co.jp/ for more information. (in Japanese)

We would once again like to take this opportunity to thank you for reading our books and for your continued support.