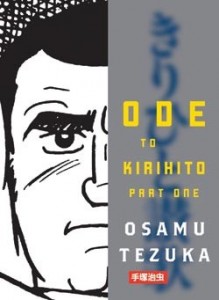 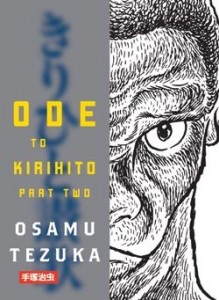 At a deeper level, however, Ode to Kirihito is an extended meditation on what distinguishes man from animal. Kirihito’s physical transformation forces him to the very margins of society; he terrifies and fascinates the people he encounters, as they alternately shun him and exploit him for his dog-like appearance. (In one of the manga’s most engrossing subplots, an eccentric millionaire kidnaps Kirihito for display in a private freak show.) The discrimination that Kirihito faces — coupled with Monmow’s dramatic symptoms, such as irrational aggression and raw meat cravings — lead him to question whether he is, in fact, still human. Throughout the story, he wrestles with a strong desire to abandon reason and morality for instinct; only his medical training — and the ethics thus inculcated — prevent him from embracing the beast within.

Tezuka explores the boundaries between the rational and the instinctual in other ways as well. Running in tandem with Kirihito’s metamorphosis is another devolution of sorts: Kirihito’s colleague Dr. Urabe, who descends into madness after uncovering a sinister plot within the administration of M University Hospital. When we first meet Urabe, he’s a self-interested cad who lusts after Kirihito’s fiancee Izumi, views Kirihito as more rival than friend, and lacks the will to challenge Tatsugaura, even when data suggests Tatsugaura’s hypothesis about Monmow is flat-out wrong. The slow dawning of Urabe’s conscience, however, precipitates a dramatic change; his psyche splits in two, with one half striving after truth and the other succumbing to base impulse. Even as Urabe begins to redeem himself, collaborating with Izumi to reveal Tatsugaura’s dishonesty, he frequently lapses into savage, sexual aggression.

Other characters’ reactions to these transformations — especially characters in positions of authority or power — provide Tezuka with ample opportunity to engage in one of his favorite activities: exposing institutional hypocrisy. The scandal surrounding Tatsugaura’s Monmow hypothesis, for example, lays bare the corruption within the barely fictional Japanese Medical Association. In his relentless quest to become head of the organization, Tatsugaura seeks to establish an international reputation as an infectious disease expert, even going so far as to suppress evidence that contradicts his thesis. Yet the revelation of Tatsugaura’s deceit does little to jeopardize his position among his peers; only the young doctors find his behavior objectionable, yet they cannot dislodge him from his powerful position.

One of the key figures in revealing Tatsugaura’s treachery, Sister Helen, also provides Tezuka a chance to tear away the veil of hypocrisy from another institution — in this case, the Catholic Church. Midway through the first volume, a priest attempts to murder Sister Helen after she contracts Monmow disease. When confronted with his act, he acknowledges his intent but denies his purpose was evil; he insists on protecting the Church’s reputation at all costs, fearing that news of Helen’s condition would bring a scandal, as the received wisdom about Monmow disease held that Caucasians were immune to it. 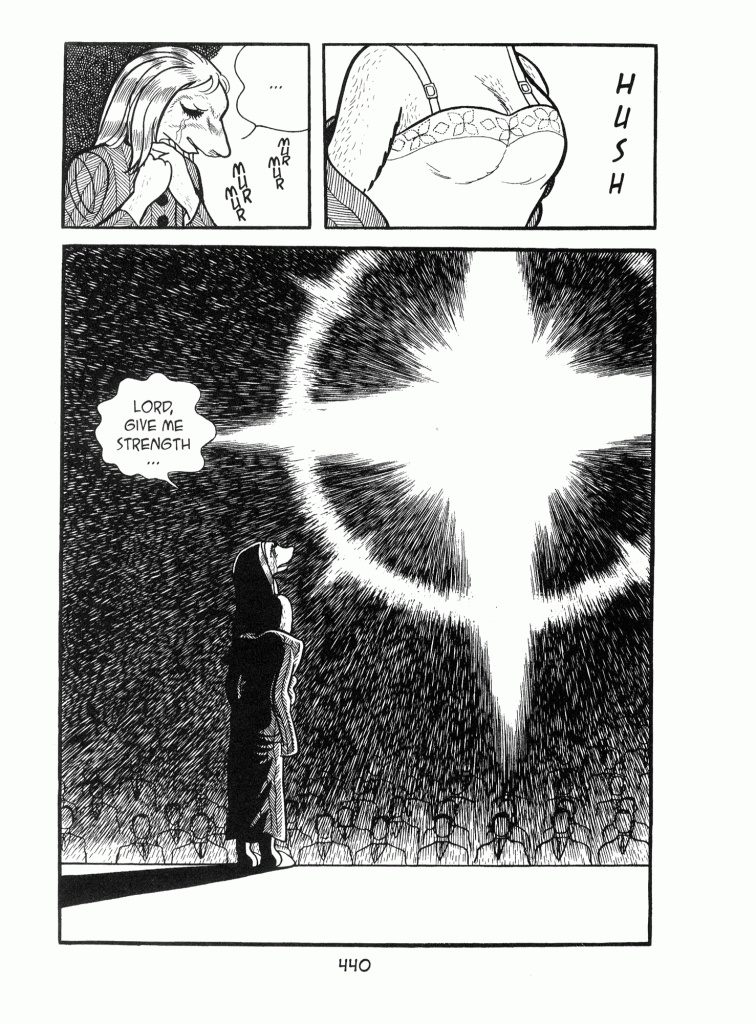 At the same time, however, Tezuka uses his characters’ metamorphoses to reveal the human capacity for selflessness and spirituality. Sister Helen provides the most obvious example; after entertaining thoughts of suicide, she has an epiphany — literally, as the cross imagery above suggests — and begins emulating Christ’s example, eventually finding her place ministering to the residents of an impoverished industrial town. Other characters demonstrate a similar capacity for selfless behavior: Urabe, for example, devotes himself to finding Kirihito, while Reika, a circus performer, helps Kirihito escape from captivity and reassert his humanity by practicing medicine.

One could certainly view Ode to Kirihito as heavy-handed allegory; there’s nothing subtle about its Christian imagery or Elephant Man storyline. Yet Tezuka’s fondness for Baroque subplots, over-the-top action sequences, and larger-than-life villains demands an equally bold approach for exploring the story’s greater themes. After all, Kirihito features dog men, sideshow freaks, an evil millionaire who hosts his own private circus, a German geneticist sporting a monocle, and an acrobat who risks life and limb to become human tempura; had Tezuka played things straight, or tried to state his man-vs-inner-beast conflict in less obvious terms, the story would seem preposterous and arty, a surreal experiment devoid of genuine human feeling.

As he would do in MW (1976-78), Tezuka pushes the boundaries of the comics medium in Ode to Kirihito, aiming for a cinematic style capable of immersing us not only in the action but in the characters’ own thought processes. Though Kirihito has its share of artfully staged chases, fights, and dramatic confrontations, the most visually arresting sequences depict Urabe’s fragile mental state: 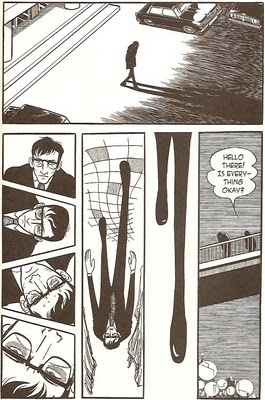 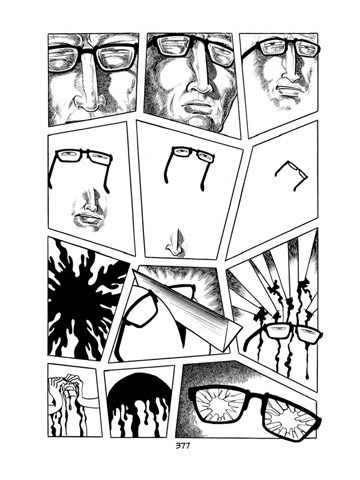 The panel shapes alone are a brilliant stroke; not only do they suggest his fractured and chaotic thought process, they also have a hint of the insect about them, as if we’re viewing Urabe’s consciousness through a fly’s eye. The knife and blood imagery are cliche, to be sure, but the shattered glasses are a novel and unsettling gesture open to multiple interpretations. Even the more conventional sequence on the left, in which Urabe leaves a hospital in a murderous rage, employs its share of neat visual tricks: Tezuka dramatizes Urabe’s personality shift by rotating the character’s image until he appears to be walking through an upside-down hall of mirrors. Amplifying the effect is the ambiguous way in which Tezuka draws Urabe’s legs in the bottom panel; as Matthew Brady observed in his review of Ode to Kirihito, the image simultaneously evokes dripping blood and moving limbs.

Perhaps the best compliment I can pay Ode to Kirihito is to say that Tezuka achieves on paper what John Frankenheimer achieved on film with The Train, Seven Days in May, and The Manchurian Candidate, transforming the humble thriller into a vehicle for telling thought-provoking, challenging stories that enlighten as they entertain. Kirihito may not surpass the narrative sophistication or visual poetry of Phoenix, but it comes awfully close. A must-read for serious manga lovers.