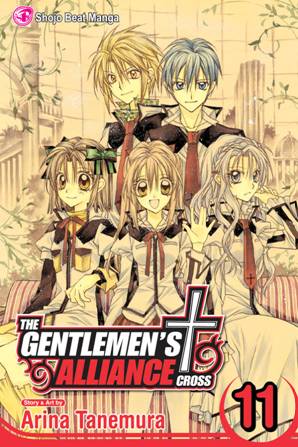 April 6, 2010 – VIZ Media will bring on the conclusion of Arina Tanemura’s acclaimed shojo drama THE GENTLEMEN’S ALLIANCE† with the release of Volume 11 today.

Haine goes to Shizumasa and Takanari’s grandfather, the head of the Togu family, to ask him to release the twins from their fate. But he tells her that she must pass the same trial the twins went through for determining the rightful Togu heir. Haine agrees, but little does she know that a former friend is now out for her life!

THE GENTLEMEN’S ALLIANCE† opens when, in return for a business loan of 50 million yen, the prestigious Kamiya family gives their daughter Haine away to the Otomiya family. Haine, now an Otomiya, is appointed to the student council of the exclusive Imperial Academy, a private school for the aristocracy. Even though Haine is of proper lineage to be on the council, she finds herself struggling to find her place among the many secrets of its elite members, especially those of the president, Shizumasa Togu, aka “the Emperor”, who holds her heart.

Arina Tanemura began her manga career in 1996 with several short stories published in the shojo manga magazine Ribon. But she started to gain fame in 1997 with her series I•O•N (published by VIZ Media, rated ‘T’ For Teens), a high school romance with a supernatural twist. From 1998 to 2000, Tanemura worked on the popular series Kamikaze Kaito Jeanne, about a young girl who is the reincarnation of Joan of Arc, followed by TIME STRANGER KYOKO in 2000–2001 and FULL MOON in 2002 (both also published by VIZ Media, rated ‘T’ for Teens). Both Kamikaze Kaito Jeanne and FULL MOON were adapted into popular TV series.