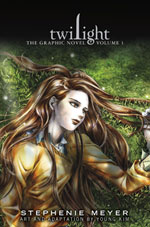 Yesterday saw the release of the first Twilight graphic novel adaptation, produced in all its glossy, hardcover glory by Yen Press. I haven’t had a chance to do more than a quick flip-through so far, but though I’ve never read the novels (and have little interest in doing so) I’m actually looking forward to taking a look at the series in graphic novel form, if only to see what all the hype is about.

By “hype” I’m not only talking about the series’ huge sales. I’m also interested in finding a connection with its notoriously rabid fans. I’ve found myself defending them quite a bit recently against accusations of being “crazy,” “repugnant,” and “freaks,” which has made me more curious about the source of their obsession than I might have been otherwise. After all, if obsessive fandom is the issue, there’s very little I can relate to more.

I started off as a pre-teen like many of us do, though my little sister (who was sporting a Shaun Cassidy pantsuit in early elementary school) made me feel like a late bloomer. I began with fiction. My first obsession was Zenna Henderson’s collected stories about The People, found in Pilgrimage and The People: No Different Flesh. I read those books (as well as most of her unrelated short stories) and adapted the concepts to my own playtime, dragging my sister in for days-long games of “Barbies” where we’d weave long tales of displaced aliens with supernatural abilities.

As a teen, I downgraded to less intellectual fare, like V.C. Andrews’ Flowers in the Attic and S.E. Hinton’s The Outsiders (my copy was re-read so many times, it literally fell apart). Since my obsession with the latter coincided perfectly with the making of Francis Ford Coppola’s film adaptation, it was that movie’s impressively pretty batch of young male leads that helped me fully embrace teen idols as sexual figures–comfortingly unattainable objects for sexual fantasies that were too terrifying at the time for me to talk about out loud, let alone act upon.

Though my tastes have matured (arguably) over time, at thirteen I truly and sincerely loved the novels I was into. I talked about them incessantly and passionately with no sense of irony. They were profound and beautiful to me, and I treated them as such. Because of my heartfelt attachment to these books, criticism of them felt personal to me, and I often found myself lashing out in their defense.

Of course, unlike most young Twilight fans, who will eventually grow up to become “normal” citizens of this world, casually engaged in mainstream entertainment as they pursue respectable jobs and lifestyles, I have maintained an ongoing obsession with various forms of fiction throughout my adulthood. After spending ten years as a professional theater geek, I moved on to obsessions with things like Buffy The Vampire Slayer, Firefly, and Harry Potter, finally landing in the territory of anime and manga fandom where I have once again found a (minimally lucrative) excuse to treat my fannish obsession as “work.” Thanks to this, I am able to justify spending hours of my time obsessing over stuff I like with friends and interacting with fun, intelligent fans who are often into stuff I’m not. It is awesome, truly. This really is the life.

So somebody, please explain to me how–in a fannish universe filled with things like lolicon, yaoi, replica underwear, and Hot Gimmick, all revered with levels of obsession so great they have a special word for it–there can possibly be anything wrong with Twilight fans. They are too obsessed? They are too vocal? They are too weird? Seriously, people have you looked around at your own fandom lately? Have you looked at your bookshelves, action figure shelves, DVD collections, hard drives, websites, or message boards? Genre fandoms are full of intensely dedicated fans who will argue tirelessly over the superiority of their fandoms or opinions, frequently in defensive, strident tones, ready to smack down anyone who dares to challenge whatever it is they are into.

What’s the difference? Well, for one, Twilight fans are (overwhelmingly) girls. The heavy backlash against Twilight fans reeks of misogyny, plain and simple. Here are a couple of the comments made yesterday to Gia Manry’s post comparing Twilight and moe fandoms:

“give my gun to shoot twilight fans”

Twilight fans are also mainly teens, driven by adolescent hormones and a need for group identification–the core of so much teenage obsession. So I ask you, anime and manga fandom: What’s your excuse?

This is the thing that’s been getting to me lately, in all the online discussion of the epic crappiness of Twilight and its fans. What I’m seeing is a bunch of adults (mostly male, but some female) berating a bunch of teen girls for acting their age.

Can a room of screaming teens be annoying? Sure. It’s also normal. That’s the way teens are hormonally programmed to behave around something that gets them excited. And you know, I’m guilty of forgetting this myself. It was around this time last year, in fact, that I found myself tweeting crankily from the all-ages yaoi panel at Anime Boston, until Lissa Pattillo reminded me to stop expecting teens to act my age.

So grow up, fandom. The Twilight girls will, thanks to simple biology. When will you?