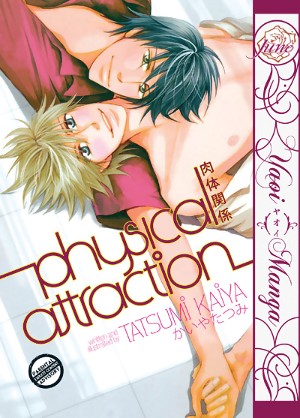 Kurata has been sleeping with his college buddy, Narusawa, for the past two months, beginning just after Kurata’s breakup with a long-time girlfriend. Certain that the relationship is purely physical, Kurata becomes ill at ease when he realizes he’s developed feelings for Narusawa. Kurata’s uncertainty leads him to seek out his ex-girlfriend for advice, but what will he do when Narusawa spots him meeting up with his ex?

Before getting around to the meat of this review, it’s important to note that though DMP lists Physical Attraction as a one-shot, it is actually an anthology of (mainly) unrelated short manga–a significant discrepancy for those of us who have come to avoid most BL anthologies like the plague. That said, though the volume is afflicted by some of the unavoidable pitfalls of short-story romance, it is more appealing than most, thanks to Tatsumi Kaiya’s skillful exposition and attention to characterization.

Most pieces of the anthology follow the same kind of premise as the title story–students or coworkers (in one story even strangers) who confront unexpected feelings for each other. One tells the story of high school lovers turned college roommates, enjoying the freedom of living together for the first time. In all cases, character development and emotional content take precedence over sex scenes, which is a rare blessing in this type of anthology. This is not meant as a judgement on sex scenes by any means (though I’ve often argued that too few are well-written enough to be meaningful) but it only stands to reason that a short manga has the greatest chance of success when the majority of its pages are actually used to develop the story.

Some are more successful than others. The title story and its follow-up, “Loving Attraction,” are the strongest, with a nicely-developed romance and fun, idiosyncratic characters (including the supporting cast). On the other end of the spectrum, “Cooled Passion,” about a reporter and a politician who were once friends, is underdeveloped, unbelievable, and seems to suggest that justice is best achieved through rape. Even the volume’s weakest stories, however, benefit from the author’s ability to effectively introduce new characters and their circumstances with a minimal amount of exposition, making the most of the limitations of the format.

Kaiya’s artwork is generic–so much so that it’s difficult to tell characters apart from one story to the next. Fortunately, strong characterization makes this less of a problem than it might be otherwise.

Like most of its kind, Physical Attraction is no match for the high drama of serial romance or even a hearty one-shot. Ultimately forgettable, it is intended to be consumed and discarded. Unlike many, however, it is a collection of (mostly) warm and engaging stories, well-suited to a quick read on a lazy afternoon.