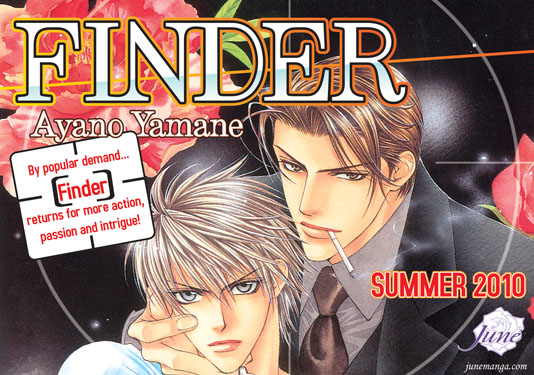 Twitter is a-buzz this evening with licensing news from the folks at Digital Manga, who have announced the rescue of Finder, a popular series previously held by the now-defunct Central Park Media. Here’s the official press release:

Gardena, CA (3/11/10)– Digital Manga Publishing and Libre Shuppan are proud to announce the licensing of the Finder Series by Ayano Yamane! The Finder series has been one of the most heavily requested series from our readers, and has been considered by fans of the yaoi genre to be the quintessential yaoi title. From one of Japan’s top-selling yaoi mangaka, Ayano Yamane, DMP is proud to release the Finder series beginning with volume one in the summer of 2010 under the June’ imprint. For more information, news updates, and to keep on top of all things Finder, visit the Finder website at www.finderseries.com!

From our friends at Libre Shuppan:

We are pleased to announce that Kazuma Kodaka’s KIZUNA-絆- and Ayano Yamane’s Finder Series, both of which were previously licensed by Central Park Media, are now acquired by Digital Manga Publishing (DMP). For these series, all volumes will be newly translated and will be published under DMP’s June imprint. Finder Series is set to be released in Summer of 2010 and Kizuna is scheduled for September of 2010.

For further inquiries regarding this matter, feel free to contact us at rights@libre-pub.co.jp or Digital Manga Inc, at contact@emanga.com We would like to take this opportunity to thank you for reading our books and for your continued support.

While out on assignment trying to document the illegal activities of the Japanese underworld, photographer Takaba crosses paths with the dark and mysterious leader Asami. Asami takes Takaba captive, in an attempt to subjugate and possess him. But when the son of the Chinese mafia enters demanding evidence that Takaba may have, will Takaba be able to survive being caught in the crosshairs of a deadly underworld feud?