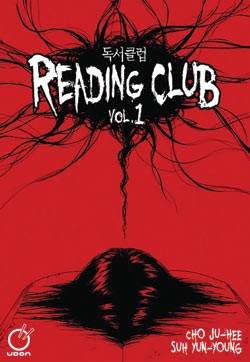 Eun-Sae is thrilled when dreamy bookworm Kyung-Do asks her to volunteer with him to clean up their school library. Unfortunately, a couple of surprises await her as she takes on this new task. Though Kyung-Do is clearly interested in reading everything in the library’s sprawling collection, he shows very little enthusiasm for actually organizing the place. Secondly, the collection includes a book with some sinister supernatural qualities that may have played a part in several tragic deaths, including that of Kyung-Do’s father. Can Eun-Sae save Kyung-Do from meeting the same fate?

Reading Club is billed as “Korea’s first horror comic for girls,” and while I can’t speak to the accuracy of that statement, I can vouch for it being very effectively geared to its target audience. The first volume favors story over romance, but with an intimate feel reminiscent of the plotty romance novels that drew me in most as a teen, like Mary Stewart’s Touch Not the Cat or The Gabriel Hounds. Her stories were always favorites of mine, marrying heart-stopping fear and heart-pounding romance, all experienced through the tight POV of her sophisticated heroines. Though Reading Club does not stick with Eun-Sae’s POV for the entirety of its first volume (nor is Eun-Sae the equivalent of Stewart’s snappy young ladies of leisure) the effect is the same. Plot is the focus of the volume throughout, but it is Eun-Sae’s feelings that drive the story, whether she’s fighting off ancient evil or boldly taking the initiative with her new crush.

One particularly refreshing aspect of the story, especially for young female readers, is the reversal of traditional heroine and hero roles. While Kyung-Do is portrayed as a passive beauty who sparkles only in the presence of good books, Eun-Sae is all action, vowing to protect her delicate boyfriend from coming to a tragic end. This reversal is never played as parody and Eun-Sae in particular is wonderfully nuanced, despite limited “screen time” in this volume. She’s sometimes brave, often lazy, occasionally dishonest, and definitely driven by hormones, just like any teen. Kyong-Do is more of a mystery, both to Eun-Sae and to us, which is exactly as it should be so early on in this kind of story.

Reading Club‘s greatest weakness at this point is its length, or rather its lack thereof. Though the series’ first volume effectively introduces both its cast and major plot points, so little is understood about the book’s sinister powers (let alone the mysterious “Reading Club”) even by the end of the volume, there is a sense of shallowness to the story’s supernatural elements that could be avoided by revealing just a bit more. Presumably deeper insight is yet to come, but it would be nice to have a stronger taste early on to better whet the appetite for future volumes. Though the volume delivers a sufficiently spooky premise along with some genuinely frightening imagery, the connection between the two is not yet solid enough to hold up under scrutiny. Why does one of the book’s victims commit suicide, while another is simply found dead with a creepy severed tongue? The story’s mythology has not yet been explored deeply enough for us to know, keeping real terror safely at arm’s length.

The series’ artwork is sparse yet vivid, helping to set the story’s dark, tense tone right from the start. Its character designs are unremarkable yet nicely distinctive from one another, helping to shape characters immediately within the story’s plotty framework. Unfortunately, the volume’s text is less easy on the eyes, printed in a small, cramped font that is sure to force some readers into squinting from page to page.

As the first of Udon’s manhwa catalogue I’ve had the pleasure to read, this volume fortunately leaves me wanting more. For smart teen romance paired with genuine chills, Reading Club is a promising choice.