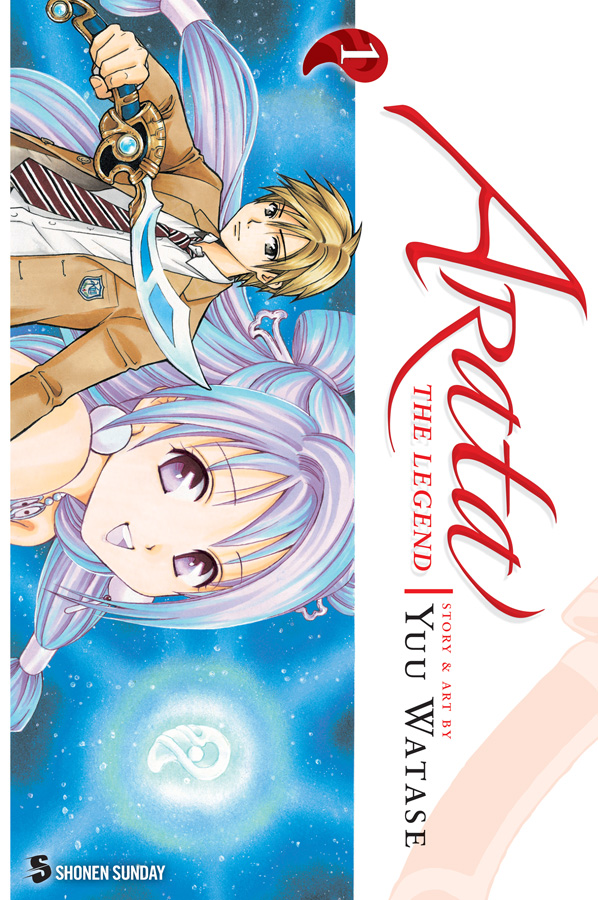 One of this month’s most interesting releases is the first volume of Yuu Watase’s recent shonen series, Arata: The Legend. Arata has been serialized online at Viz’s Shonen Sunday website since July of last year. This is its first print release.

I have mixed feelings about Watase’s classic Fushigi Yugi, though much love for its current spinoff, Fushigi Yugi Genbu Kaiden. A quick glance at Arata proves that Watase’s art style lends itself well to shonen, which comes as no surprise at all. One of Genbu Kaiden‘s strengths is its energetic but clear action sequences–a rare virtue in shonen manga.

There are few reviewer reactions to refer to at this point, though Connie at Slightly Biased Manga seems to have enjoyed the first volume. Fortunately, readers can preview the series for free themselves, now up to eight chapters at Shonen Sunday. Here’s the full press release from Viz:

San Francisco, CA, March 3, 2010 – VIZ Media, LLC (VIZ Media), one of the entertainment industry’s most innovative and comprehensive publishing, animation and licensing companies, brings famed manga creator Yuu Watase’s potent blend of mythical fantasy adventure and lavish artwork for the North American debut of ARATA: THE LEGEND on March 9th. The new series is published under the SHONEN SUNDAY imprint, rated ‘T’ for Teens, and will carry an MSRP of $9.99 U.S. / $12.99 CAN.

In a world where humans and gods coexist, Arata is the unfortunate successor to the matriarchal Hime Clan–unfortunate because if he’s not cross-dressing to hide his gender one minute, he’s fleeing for his life the next! When Arata winds up in the modern world and switches places with a boy named Arata Hinohara, it’s a wonder which Arata is actually better off…

In Volume 1, Hinohara is the spitting image of Arata, so he suddenly finds himself fighting people after his life! As he navigates through this foreign world filled with power-hungry warriors, who will come to his aid? One thing’s for sure–it’s not easy being Arata!

“I’m really excited to see ARATA: THE LEGEND joining the Shonen Sunday imprint. The art is gorgeous, the series is action-packed and no one can create a lush fantasy world the way Yuu Watase can!” says Amy Yu, Editor, VIZ Media. “Fans who know her work in the shojo genre will experience a whole new side to this creative mastermind.”

Born March 5 in Osaka, Yuu Watase debuted in the Shôjo Comic manga anthology in 1989. She won the 43rd Shogakukan Manga Award with Ceres: Celestial Legend. One of her most famous works is Fushigi Yûgi, a series that has inspired the prequel Fushigi Yûgi: Genbu Kaiden. In 2008, Arata: The Legend started serialization in Weekly Shonen Sunday.

ARATA THE LEGEND is one of the newest titles under VIZ Media’s SHONEN SUNDAY imprint, the new standard for riveting stories and creative excellence. Titles under this imprint are more than shonen stories with struggling heroes and endless battles. Shonen Sunday characters are tested both mentally and physically, asked to prove their worth alongside loyal allies and encounter legends that have outlasted time itself. Each manga series under the SHONEN SUNDAY imprint will enchant the reader with tales from Japan’s top manga creators featuring complex, intriguing characters in richly imagined worlds.

For more information on this title or other SHONEN SUNDAY series, please visit www.shonensunday.com.