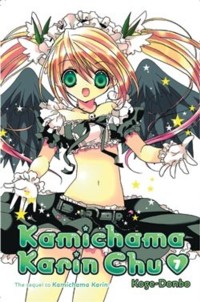 I have a review offsite this morning in today’s Manga Mini’s column, for the final volume in Koge-Donbo’s Kamichama Karin Chu, published by Del Rey. Though I have found plenty to enjoy in this series during its run, things fell apart a bit over the last few volumes, limiting its appeal for adult readers, in my view.

What this series mainly suffers from, however, is inevitable comparisons between it and Del Rey’s other currently-running magical girl series, Shugo Chara! which unfortunately blows it away on pretty much every front–plot, characterization, art, you name it. Perhaps the most obvious disparity between the two, however, is in its depth of messaging, especially for female readers.

Karin’s focus throughout the series is to grow up to be a wife and mother… and a powerful god, of course, but a wife and mother first. Even in this volume’s final side story, she is portrayed as a poor student who strives to bring up her grades only so that she can get into the same high school as her future husband. Shugo Chara!‘s Amu, on the other hand, is focused on discovering her own talents and desires, torn between the many paths open to her, none of which ultimately have to do with boys. Don’t get me wrong, here. There’s nothing objectionable about a woman being a wife and mother, and certainly homemaking is one of Amu’s options as well. I think offering girls a variety of choices, however, is a much stronger way to go and much more in tune with the dreams of young girls today.

Interestingly, too, though Amu fights alongside the Guardians, a group made up of both boys and girls, Karin’s fellow gods are all boys whose help she requires in nearly every battle. While I appreciate messages of cooperation (teaching kids that they should fight all their battles alone is supremely unhelpful), it really does matter that Amu’s backup is consistently mixed-gender and I think that sends a much healthier message to both girls and boys.

Am I trying to paint Shugo Chara! as a feminist series? No. I’m really not. But I do think it offers a great deal more depth in its portrayal its young female protagonist and the world around her than can be found in Kamichama Karin Chu, by a lot.