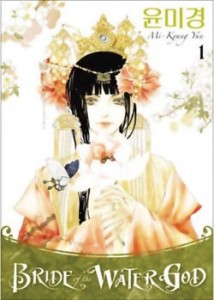 There are two things to know about Bride of the Water God before you begin reading: first, the artwork is stunningly beautiful, and second, the story takes frequent, confusing detours that are almost impossible to explain, given what we know about the characters. If you find yourself vacillating between “Oh, so pretty!” and “Sweet Jesus, that makes no sense!”, know that you’re not alone.

The story begins with a human sacrifice. In a rural village plagued by drought, town elders try to appease Habaek, the water god, with an offering of a “bride.” They place Soah, a stoic young beauty, in a leaky boat and set her adrift on a nearby lake. Instead of drowning, however, Soah washes ashore in the enchanted kingdom of Sugok, home of the water god. Habaek reveals himself to Soah not as the grotesque, man-eating creature she imagined he would be, but as a ten-year-old boy who presides over a lively court of deities. As she begins to explore Habaek’s sprawling palace, her initial relief turns to fear: Nakbin, Habaek’s previous wife, died under mysterious, possibly violent, circumstances that no one will discuss openly.

Soah faces another vexing problem as well. Not long after Habaek installs her at the palace as his bride, a tall, handsome man named Mui begins paying Soah nighttime visits. (And not for a friendly game of Scrabble, I might add.) When Soah presses Habaek’s courtiers for information about Mui, they offer conflicting explanations of who, exactly, he is, with some suggesting that Mui is Habaek’s nocturnal form and others implying that he is, in fact, a rival of Habaek. Soah’s loyalty to Habaek is further tested by her growing reliance on Hoo-yee, Habaek’s most trusted military officer and — natch –an impossibly beautiful man whose obvious affection for Soah arouses Mui’s jealousy. 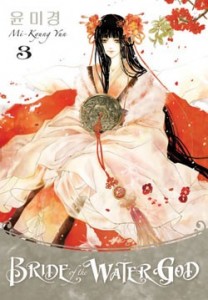 A story this unabashedly romantic relies heavily on atmosphere and suggestion to cast its spell — two things at which Mi-Kyung Yun excels. The Sugok landscape is a delightful mixture of “once upon a time”—haunted forests, lavish palaces—and more contemporary influences—fish-shaped dirigibles, floating castles reminiscent of Miyazake’s Laputa. As one might expect, the gods wear lavish robes; Yun offers detailed renderings of the intricate patterns and decorative embroidery characteristic of traditional hanbok. Though these patterns sometimes spill into the backgrounds, taking the place of conventional sun-jeong (shojo) motifs like flower petals, Yun is a disciplined draftsman. She balances her more detailed images with ones of stark simplicity: a few blood spatters on a blank page hint at Habaek’s violent past, a burning candle indicates the passage of time.

Yun’s artwork is not without problems, however. Several of her male characters are virtually indistinguishable from one another. Hoo-ye and Tae-eul-jin-in, the mysterious court physician, for example, are differentiated only by the good doctor’s fondness for wearing glasses, while Mui and Ju-Dong, the fire god, bear an uncanny resemblance to one other, distinguished primarily by the amount of bare chest on display. (Mui tends to wear his robes open to the waist; Ju-Dong, a minor character, is more discrete.) The other drawback to Yun’s artwork is its stiffness. Even when characters leap through the air, stand in the night breeze, and burst out of the water, the images have a static quality, as if Yun were copying a diorama of beautiful porcelain dolls, rather than drawing from life. The drape of the characters’ gowns, in particular, has a starched quality; the fabric looks architectural, rather than soft and fluid. In short, Yun is a spectacular pin-up artist — as the numerous title pages and color inserts attest — but is still developing her sequential chops. 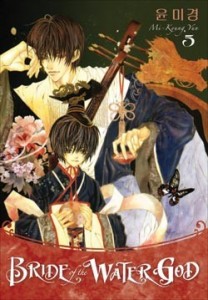 If the artwork is uneven yet beautiful, the narrative is a flat-out mess, an ungainly hybrid of folktale and soap opera. To sustain the reader’s interest over five, ten, or fifteen volumes, the author needs a clear strategy for presenting her material: either she relates her story in the manner of a legend, as a chain of events that logically follow one another in sequence (e.g. hero goes on quest to prove worthiness to marry heroine, performs a series of tasks, then wins her hand), or populates her story with psychologically complex characters who grow and change in response to events. Yun is clearly aiming for the latter, but the story is so incoherent and dream-like on a moment-to-moment basis that it doesn’t make much sense; characters behave strangely, appear out of nowhere for the convenience of the plot, and contradict themselves with whip-lash inducing frequency.

Tearing away masques is an essential authorial trick, of course — a technique for revealing hidden facets of the characters’ personalities, or revealing their true motives. Yun, however, is so taken with the idea that nothing is as it seems that it’s impossible to get a fix on any of the characters. Soah’s interactions with Habaek, for example, suggest that she feels little to no emotional attachment to the boy-deity. When a Nakbin look-alike appears on the scene, however, Soah nearly comes unhinged at the thought that Habaek prefers this impostor over her, readily agreeing to return to the human world so that her memories of Habaek’s betrayal can be erased. Soah’s behavior might make more sense if she realized that Habaek and Mui were different manifestations of the same deity, or if her interactions with Habaek were personable, but as of volume five, she still believes that the two are separate individuals, and Habaek remains coolly detached in her presence.

…it’s impossible to deny Bride of the Water God‘s appeal. Perhaps it’s a sign of arrested development, or just a measure of how attuned I am to my inner eight-year-old, but I still love a good folktale. The same things that fired my imagination as a kid — ghosts, dragons, resourceful heroines, talking animals, terrible curses, magical objects, lovers separated by fate — still appeal to me as an adult reader. Bride of the Water God may be static and confusing — hallucinatory, if I’m in a more generous mood — but in its best moments, Mi-Kyung Yun’s story reads like an honest-to-goodness fairy tale, as Grimm as anything Jacob or Wilhelm collected in the Bavarian countryside.

This is a revised version of a review that appeared at PopCultureShock on October 10, 2007. Click here for the original text. N.B. The original essay covered only the first volume of the series.