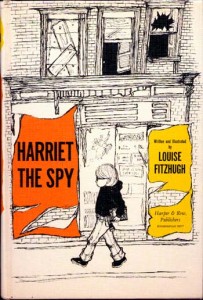 First published in 1964, Harriet the Spy featured a radically different kind of heroine than the sweet, obedient girls found in most mid-century juvenile lit; Harriet was bossy, self-centered, and confident, with a flair for self-dramatization and a foul mouth. She favored fake glasses, blue jeans, and a “spy tool” belt over angora sweaters or skirts, and she roamed the streets of Manhattan doing the kind of reckless, bold things that were supposed to be off-limits to girls: peering through skylights, hiding in alleys, concealing herself in dumbwaiters, filling her notebooks with scathing observations about classmates and neighbors. Perhaps the most original aspect of Louise Fitzhugh’s character was Harriet’s complete and utter commitment to the idea of being a writer; unlike Nancy Drew, Harriet wasn’t a goody-goody sleuth who wanted to help others, but a ruthless observer of human folly who viewed spying as necessary preparation for becoming an author.

Even now, nearly sixty years after Harriet the Spy first appeared in print, it still seems like a radical text. Fitzhugh helped usher in an era of young adult fiction featuring tough, psychologically complex heroines who weren’t always likable, characters like the plain, frizzy-haired Meg Murray of A Wrinkle in Time or the smart, prickly Galadriel Hopkins of The Great Gilly Hopkins. Yet Harriet remains in her own special class. Unlike Meg or Gilly, she isn’t the heroine of an inter-dimensional sci-fi epic or a gritty, realistic drama; she’s the heroine of her own story, a self-mythologizing character who inhabits a highly romanticized version of the adult world.

Nico Hayashi, code name “Sexy Voice,” is a bit older than Harriet — Nico is 14, Harriet is 11 — but she’s cut from the same bolt of cloth, as Sexy Voice and Robo amply demonstrates. Like Harriet, Nico entertains fanciful ambitions: “I want to be a spy when I grow up, or maybe a fortune teller,” she informs her soon-to-be-employer. “Either way, I’m in training. A pro has to hone her skills.” Nico, too, has a spy outfit — in her case, comprised of a wig and falsies — and an assortment of “spy tools” that include her cell phone and a stamp that allows her to forge her parents’ signature on notes excusing her from school. Like Harriet, Nico hungers for the kind of adventure that’s supposed to be off-limits to girls, skipping school to pursue leads, analyzing a kidnapper’s ransom call, luring bad guys into traps. Most importantly, both girls are students of adult behavior. Both Harriet the Spy and Sexy Voice and Robo include a scene in which the heroine constructs detailed character profiles from a few snippets of conversation. The similarities between these moments are striking. In Fitzhugh’s book, Harriet visits a neighborhood diner, nursing an egg cream while listening to other customers’ conversations:

Sometimes she would play a game and not look at the people until from listening to them she had decided what they looked like. Then she would turn around and see if she were right… Her egg cream finished, Harriet summed up her guesses. The boy with the rat father would be skinny, have black hair, and a lot of pimples. The lawyer who won all his cases would be short, puffy-looking, and be leaning forward. She got no picture of the shadeless girl, but decided she must be fat. She turned around.

In Sexy Voice and Robo, we first meet Nico in a restaurant. She’s stationed herself in a booth with a pair of binoculars, studying an assortment of men who have unwittingly arranged to meet her via the tele-club where Nico moonlights. When questioned about her behavior by another patron, Nico cheerfully explains:

See those men down there holding papers? I’m conducting research on them… observing… connecting their voices to the way they look and move.

Like Harriet, Nico is rather dismissive of her subjects, concluding that one man is “fixated on social status” and “needs to feel above the women he’s with” from his “clear but flat voice,” while declaring another is “just after sex” because “he’s got kind of a reedy voice and he mumbles a lot.” But while the accuracy of Nico’s observations go unchallenged, Harriet’s turn out to be a mixture of hits and misses:

At first she couldn’t tell. Then she saw the by with black hair and pimples. She felt a surge of triumph. She looked at what must be the lawyer, one of two men. Then she listened to see of he were the one. No, the other one was the lawyer. He wasn’t short and fat, he was long and thin with a handsome face. She consoled herself with a faint puffiness he had around the eyes.

Well, no wonder she won’t walk around in a slip, Harriet thought, looking at the girl with no shades; she’s the fattest thing I ever saw.

Manga-ka Iou Kuroda never contradicts Nico’s conclusions, though as the story unfolds, we realize the degree to which Nico sees what she wants to see, and not necessarily what’s there. Late in the volume, for example, Nico’s employer dispatches her to retrieve a key from a crafty old woman who, Nico discovers, was a professional spy. It’s a fascinating chapter on many levels; we’re never entirely sure if we’re watching a real event or something from Nico’s imagination, nor is it obvious whether Nico grasps that the old woman led a far less glamorous life than the kind of life Nico envisions for herself. “I did it because I was good with languages and wasn’t very pretty,” the old woman tells Nico. “Sometimes it’s your skills and not your will that sets you on your path.”

The other striking similarity between Harriet the Spy and Sexy Voice and Robo is the degree to which the city plays an essential role in the story, providing an exciting playground for Harriet and Nico to act out their spy fantasies, and shaping their impressions of adult behavior. In Harriet the Spy, Fitzhugh renders Harriet’s particular corner of the Upper East Side in vivid detail, describing its fancy apartment buildings and down-at-the-heels boarding houses, and contrasting the neat, tree-lined street where Harriet lives with the louder, dirtier, bustling streets of Yorktown, then a working class German-Italian enclave. We see the neighborhood through Harriet’s eyes, as a collection of hiding spaces and vantage points for studying adults up close: the plump divorcee who spends all day in bed talking on the telephone, the lonely craftsman who hides twenty-six cats from the health code inspector, the father (hers, to be exact) who retires to his study to nurse a martini or three.

In Sexy Voice and Robo, Kuroda shows us Tokyo through Nico’s eyes, as a vibrant collection of shopping districts lined with places perfect for clandestine activities: cafes, movie houses, love hotels, bookshops, subway stations. Kuroda doesn’t employ the usual shortcuts for establishing the Tokyo landscape — skyscrapers and towers — but offers a pedestrian-eye view of the city, populating each setting with colorful characters, filling shop windows with merchandise, and suggesting street noise with evocative sound effects. From time to time, Kuroda takes us into less familiar places; in chapter eleven, for example, Nico finds the retired spy living in a serene residential neighborhood, her house concealed by a screen of trees and shrubs, while in chapter three, Nico attends a soccer match at a crowded stadium. Though these locations stand in stark contrast to the more built-up urban environment in which most of the story takes place, we can see how both locales complement Nico’s romantic notions about where, what, and how a spy conducts her business; Nico’s adventures never take her anyplace grungy or prosaic, nor do they take her to customary teen haunts. In her mind, she’s more adult than the adults around her, and as a consequence imagines herself living in the grown-up world.

Which brings me back to my original observation about Nico: like Harriet, she’s a self-mythologizer, the star of her very own spy novel. Though we, the readers, can appreciate the degree to which Nico’s fantasies shape her perception of what’s happening, we still find her an appealing, true-to-life character whose pluck and insight set her apart from her peers. Nico, like Harriet, has big dreams that aren’t hemmed in by gender or age; she isn’t the least bit worried about appearances or impressing a boy or solving mysteries for the good of all, but in hustling a few bucks and training for an exciting career as a spy… or a fortune teller. I can’t imagine a more welcome role model for teenage girls.

This essay is one contribution to this week’s Moveable Manga Feast, a virtual book club in which bloggers share thoughts about a favorite series. For additional entries, please visit The Manga Curmudgeon, where host David Welsh has posted reviews, interviews, and links to essays exploring Sexy Voice and Robo from a variety of angles.

HARRIET THE SPY • WRITTEN AND ILLUSTRATED BY LOUISE FITZHUGH • RANDOM HOUSE • 300 pp. • AGES 10 AND UP