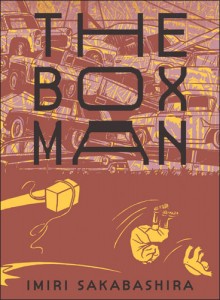 A few weeks ago, Salon columnist Laura Miller offered a radical suggestion for bookworms: make a New Year’s resolution to read outside your comfort zone. Though I like to think my manga-reading habits are broad and adventurous, I cheerfully acknowledge that there are certain categories that I strenuously avoid. All things mecha, for example: I lost interest in Bokurano Ours when I realized that it would be a grim variation on the standard children-piloting-giant-robots scenario. Underground manga, for another: I know as a manga critic I’m supposed to think Short Cuts and Mr. Arashi’s Amazing Freak Show are brilliant, sophisticated, daring, etc., but their disturbing imagery made me kind of queasy. These are blind spots, I know, so I decided to address my hang-ups head-on by making 2010 The Year of Reading Everything.

The Box Man is a collection of trippy set-pieces connected by a baldly literal conceit: a journey. The book opens with a man in sunglasses and his companion, a cat with a carapace, loading a box onto the back of a scooter. The two then set off into the night, encountering goons, wrestlers, aliens, two-headed pigs, VW-sized protozoa, and lounge singers in the back alleys and sewers of an unnamed city. Though they’re chased and menaced throughout the book, there isn’t an obvious rationale for any of the activity; it’s action for action’s sake. The lack of plot isn’t fatal, but when the goings-on include wrestling matches that pit monsters against humans in grotesquely sexual ways… well, call me a nice Irish Catholic girl, but it seems like those sequences ought to serve some clear purpose. (They don’t.) Even my attempts to contextualize these images within the greater history of shunga print-making only went so far; yes, I can see these images’ relationship to, say, The Dream of the Fisherman’s Wife, but no, I’ve never had the urge to frame something like that and hang it over my sofa, nor do I find the Creature Double Feature angle a playful update on the tradition.

It’s a shame that these images take up so much space in the middle of the book, as it’s obvious that creator Imiri Sakabashira has a fertile imagination. Sakabashira loves to take the familiar and make it strange, grafting a human head onto a crab’s body, for example, or stocking the local fish market with the kind of toothy critters normally found miles below the ocean’s surface. It’s also undeniable that Sakabashira has serious drawing chops; his streetscapes have a vital energy and specificity that’s missing from a lot of manga, filled with meticulously-drawn signs, clothes lines groaning under the weight of laundry, weedy lots, and tangled power lines.

Yet for all the obvious craft that went into The Box Man, I could never quite abandon myself to the artwork. I’ve always found surrealism one of the shallower manifestations of modernism, an overly intellectualized attempt to repackage Romantic interest in dreams, the supernatural, and the occult as a penetrating critique of positivism. I would never deny the artistry of Dali or Ernst, but I would never put their best work on par with, say, Picasso’s, as those melting clocks and fireside angels always seemed more like stunts than meaningful statements about the modern condition. The same problem bedevils The Box Man: it’s vivid and hallucinatory and nightmarish, yet in the end, all that furious activity doesn’t signify very much.