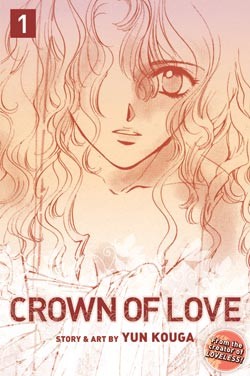 “I’d sell my soul to the devil … if it would make her notice me.”

Hisayoshi Tajima is an aloof high school student—a stereotypical “prince” type, fawned over and admired by all the girls in his class. Though none of his classmates has ever caught his interest, a chance encounter on the train throws him into sudden infatuation with a young female idol, Rima Fujio. Over the next month, his fixation with Rima becomes so strong that everything else (including schoolwork) begins to slip as he spends most of his time attending Rima’s video tapings and keeping up with news from her fan club. Fortunately (or unfortunately) for Hisayoshi, he catches the eye of Rima’s former manager, Ikeshiba, who lures him into a career as an idol with the promise of getting him close to Rima.

Crown of Love is the retelling of an older series by mangaka Yun Kouga, originally serialized in 1988. That series was only two volumes long, with an ending described by the artist as “abrupt.” With that in mind, it’s not surprising that this volume offers an uneven mix of clunky exposition and insightful characterization.

The volume’s narration switches point-of-view constantly, revealing far too many of the characters’ inner thoughts, most of which could be more effectively implied through the story’s dialogue and art. The story’s chronology is all over the place too, jumping back and forth from Hisayoshi’s encounters with Rima, his disapproving father, and Ikeshiba, creating a great deal of confusion over what happens when.

All this aside, where Kouga succeeds, and stunningly so, is in her characterization. There are no shojo stereotypes here, despite appearances.

As he watches his desperate, submissive mother cowering under the rule of his controlling father, Hisayoshi is horrified to recognize himself in both of them. He is sickened by the intensity of feeling he has for Rima, a girl he barely knows, but can’t stop himself from prostrating himself before her, like his mother before her husband. Similarly, he recognizes his father’s stubborn arrogance in his own face and voice and hates himself for that. Hisayoshi is fully aware of what he means to Ikeshiba—fortune, notoriety, and possibly (though only lightly implied) sexual satisfaction—and though it angers him, he is willing to be led along in order to achieve his own goals. For all his righteous anger, he’s ready to play the game, too. “You’re so convenient, like a taxi,” he says to Ikeshiba after calling him in the middle of the night for a ride and a place to stay.

The idol, Rima, is in love with her married former manager (Ikeshiba) and resentful of Hisayoshi, whom she sees as a rival—more for Ikeshiba’s attention than the public’s, though she uses the latter as her rationale. She is insecure about her position in the business and endlessly embarrassed by her mother’s indiscretions. Rather than the typical bird in a gilded cage, she is portrayed as a scared young woman who gratefully accepted her career in order to escape her family and her own limitations. “Well, I can’t get a real job! There’s nothing else I’m good at!” she barks at Hisayoshi, angered by his nonchalance over his own career. More than anything, though, she wants to be taken care of by someone more capable than her mother.

Ikeshiba, however, is the series’ true piece of work. Manipulative and emotionally unavailable, he has few scruples about anything if it will get what he wants. When Rima’s attachment to him becomes too desperate to be convenient, he simply turns her over to another manager. Still, he’ll use that attachment to help reel in Hisayoshi without even a trace of guilt. His full interest in Hisayoshi is unclear, though he carelessly engages in a sort of artful flirting when Hisayoshi calls him for help. His full interest in anything is really anyone’s guess, though he goes about it all with a smile on his face. “I’d sell my soul to the devil … if it would make her notice me,” Hisayoshi muses early on. It seems somewhat possible that he has.

The fact that the characters seem to know just how screwed up they are is what rescues them from being too disturbing to bear, though even then it’s hard to read some of Hisayoshi’s internal monologue without feeling a bit of a chill. “I keep thinking of all these different things I want to do with you. Like this… and that…” he says to himself near the end of the book, dreaming of Rima. “But that’s okay, right? As long as I’m just thinking about it, it’s not wrong. I haven’t done anything yet.” It’s difficult at this point to tell just how seriously Kouga takes the broken universe she’s created in Crown of Love, something that will ultimately decide whether the series is deep and insightful or just plain creepy.

As always, Kouga’s art is a highlight of her work. There’s something essentially cheerful and straightforward about her layout and designs that gives a story like this an even darker tone than it might have with a more overtly sinister look. Also, though the story is far from light-hearted, there is a clarity to Kouga’s visual storytelling that keeps it from becoming mired in its own weight.

Though this series’ first volume has its share of stumbles, it is also genuinely intriguing, more than many shojo titles can claim this early on. Crown of Love is definitely worth a try.