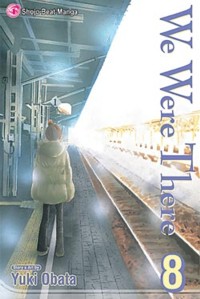 As Yano’s mother prepares for her move to Tokyo, it becomes painfully clear that her financial plans are far from sound, forcing Yano to confront the possibility of leaving Nana behind to join her, something he swore he’d never do. Meanwhile, with things still shaky between Yano and Nana, Takeuchi’s sister urges him to take advantage of the situation, but, unwilling to be a consolation prize, Takeuchi instead confronts Nana to let her know what’s going on, in hopes she’ll convince Yano to stay. Though the news shocks Nana out of her most recent bout of insecurity, she is determined to support him regardless of whether he stays or goes and tells him so, a declaration she ultimately regrets.

Though it’s quite a relief to see Nana finally released from the excruciating indecision that has plagued her for several volumes, it is decision that ends up hurting her most, regardless of whether she’s doing the right thing. One of this series’ greatest strengths, of course, is its refusal to pretend that there is a “right thing,” regardless of established romantic conventions. Obata’s characters make grand declarations in one breath and waffle in the next, ringing more true in their inconsistency than a hundred shojo heroines “doing their best.” Even as the story falls into familiar scenarios of rivalry and forced partings, it does so with a level of nuance so rarely brought to this type of manga that it manages to feel genuinely fresh, even in its most dramatic moments.

Even eight volumes in, this series has lost none of the emotional ambiguity that has characterized it since the beginning, while gaining a romantic momentum that has only enhanced its likability, at least for this reviewer. Its depth and poignancy, matched by very few titles in the current lineup of translated shojo (only Sand Chronicles immediately springs to mind), should be more than enough to place We Were There at the top of anyone’s must-read list.