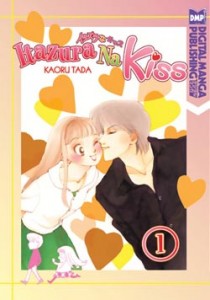 Seventeen-year-old Kotoko Aihara is a ditz, the kind of girl who gets easily flustered by math problems, blurts whatever she’s thinking, and burns every dish she attempts to make, be it a kettle of boiling water or beef bourguignon. Though Kotoko’s poor academic performance consigns her Class F — the so-called “dropout league” at her high school — she has her eye on Naoki Irie, the star of Class A. Rumored to be an off-the-chart genius — some peg his IQ at 180, others at 200 — Naoki is an outstanding student whose good looks and natural athletic ability make him an object of universal admiration. Kotoko finally screws up the courage to confess her feelings to him, only to be curtly dismissed; Naoki “doesn’t like stupid girls.” Furious, Kotoko resolves to forget Naoki.

This being a shojo manga, however, author Kaoru Tada contrives an only-in-the-pages-of-Margaret scenario to bring her reluctant lovebirds together: an earthquake. When a tremor flattens Kotoko’s house, she and her father don’t go to a shelter or a hotel. No, they take up residence at… the Iries! (Kotoko and Naoki’s fathers are lifelong friends, having attended the same high school thirty years prior.) Though Mr. and Mrs. Irie warmly embrace Kotoko, Naoki balks at her presence, forbidding her to acknowledge him at school or tell her friends where she’s staying. Making matters worse are Naoki’s younger brother Yuuki, a fiercely intelligent third grader who shares Naoki’s contempt for Kotoko, and Naoki’s mother, a cheerful busybody who tries engineering a relationship between Kotoko and her son; their intrusions into Kotoko’s life are a constant reminder of just how awkward her situation really is.

Tada’s set-up is credulity-straining — to say the least! — but she populates her story with so many fabulous supporting players it’s easy to forgive the absurd plot twists. Yuuki is my favorite character, a pint-sized terror who’s equal parts Stewie Griffin and Harriet the Spy, filling a notebook with detailed (and unflattering) descriptions of Kotoko’s daily routine. When Kotoko discovers his “observation diary,” a hilarious battle royale ensues, as she tries to persuade Yuuki that she is, in fact, smart, kind, and attractive. Kotoko’s Class F pals are another welcome source of comic relief. Though her friends are strictly one-note characters — a wiseacre, a wiseguy who carries a torch for Kotoko — they function as a kind of salty Greek chorus, alternately rooting for Kotoko and ruing her impulsive behavior.

Even Tada’s lead couple are more appealing than they initially seem. Kotoko, for example, turns out to be spunkier and smarter than one might have guessed from the opening pages, tapping into a hidden reserve of cunning when she discovers an incriminating photo of Naoki. Naoki, for his part, demonstrates a capacity for chivalrous behavior, even though he remains appalled by Kotoko’s… well, stupidity. (Spoiler alert: She doesn’t become a Nobel laureate overnight.)

Tada’s artwork is serviceable, with simple layouts and minimal attention to background detail, save for the occasional patch of screentone. Though crude, her sketchy character designs prove surprisingly effective, neatly encapsulating each cast member’s personality in just a few simple shapes and lines: Naoki’s hauteur by his sharp nose and rooster-like shock of hair, Kotoko’s naivete by her round, girlish face. The characters’ rough, unfinished look readily lends itself to the kind of facial and bodily deformations so characteristic of the shojo rom-com; I’ll take Tada’s unpolished yet soulful cartooning over the super-slick stylings of Arina Tanemura any day.

Reading Itazura Na Kiss, it’s easy to see why the series proved so influential. Tada makes opposites-attract comedy seem effortless — just throw your leads under the same roof and presto! hilarity and romance ensue. What Tada did better than many of her admirers, however, is make the comedy count for something more than just a few laughs; her characters’ pratfalls and humiliations serve as catalysts for self-reflection and growth, making it seem plausible that Naoki and Kotoko might be right for one another… some day. (I never rule out the possibility of a deus ex-mangaka bringing them together before then, however.) Highly recommended.