The Way To Heaven
By Yamimaru Enjin
Published by DMP 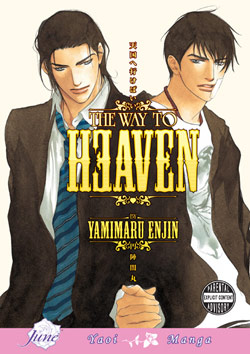 Moriya is a former boxer whose eyes were so damaged in his first pro fight that it ended his career. Watase is a former yakuza whose partner was so moved by watching a boxing match (coincidentally, the very match that permanently injured Moriya) that he insisted on leaving the world of crime, taking Watase with him. Together, they are strangers who find themselves plucked from Earth at the instant of their deaths by an alien woman with the power to manipulate time. The alien wishes to use Moriya and Watase as subjects in an experiment she’s developed to determine if “recycling” methods used on her planet could be put to use in order to solve Earth’s energy crisis. “The human body is filled with energy,” says the alien scientist–energy that only need be extracted. For this purpose, she transforms Watase into a vampire whose mission is to collect vials of blood, and Moriya into a werewolf who must collect vials of semen (don’t ask me). For each vial collected, the two of them will earn 0.1 seconds “before impact.” In other words, they will gain back a tenth of a second of their lives before they both were hit by an oncoming truck.

If this synopsis sounds strange, it only gets stranger. As Moriya and Watase are sent out each day to collect their respective fluids, eventually they begin to realize that they are being sent five years into the past, into the same day over and over again. Furthermore, their former selves still exist in this day–a truth that hits Moriya hard the day he encounters the old Watase (still a hardened yakuza) in his daily hunt. As the two of them are shoved into a windowless cell together each night, they begin to form a real bond, and Moriya (who is gay) even finds himself harboring feelings for Watase. When Watase confides to Moriya that he wants to try to find a way to save his former partner, Akutsu, from being killed, despite the fact that this could potentially alter history so significantly that he might never even meet Moriya on their fated day of death, Moriya takes that as final confirmation that his feelings are not returned and agrees to try to help him. Thus the two of them try to collect as many vials as possible in an effort to stretch out their earned time long enough to reach the date of Akutsu’s death.

There is more plot–much, much more–but surely by now it’s clear that The Way To Heaven is simply weird. It’s also strangely compelling. Interestingly, the author does not show much of what Watase does during his hunting hours, though it is revealed that his specialty as a yakuza was luring women into fraudulent marriages, so one can assume his hunt for blood might look quite similar. Moriya, however, is an open book. Certain that his feelings for Watase are not returned, he becomes obsessed with Watase’s former partner and begins targeting Akutsu for his mission every day. What he intends to get out of this is unknown, but his obsession is poignant and honestly fascinating. The relationship between the two main characters is quite engaging as well, for if the story’s premise is undeniably cracktastic, it also creates an unusual scenario in which a romance between a gay man and a straight man becomes genuinely believable over a relatively short period of time. Plot-driven romance may not be the easiest to pull off, but when a story is confined to a single volume, it can go a long way towards moving things forward at a credible pace.

That The Way To Heaven ultimately fails on most levels is pretty much irrefutable. Its fantasy plot, while intriguing, is poorly planned and consequently filled with gaping holes and strange missteps (Moriya never once turns into a werewolf, for instance, and the author seems eternally undecided about whether or not vampires can go out in the daylight), and though the author throws in plenty of breezy humor to try to keep reader expectations low, her sheer earnestness over the alien’s manipulation of time and its subsequent impact on the main characters exposes her own ambition. Additionally, despite Moriya’s tawdry mission, the story’s sexual content may not be quite enough to satisfy yaoi fans, as his romance with Watase is surprisingly chaste throughout most of the volume.

On the other hand, believable romance trumps sexual content any day, at least for this reader, and though the author’s ambitions obviously exceed her skill in terms of plot (at least within the constraints of a manga this short), the result makes for a more interesting read than most of the single-volume yaoi stories I’ve personally encountered. Furthermore, the volume completely passes on establishing an obvious seme/uke relationship between the two main characters, eliminating one of my least favorite aspects of yaoi manga. Also, though Enjin’s artwork is not spectacular, it is solid and effective in telling her story, lending a much-needed sense of stability to the work.