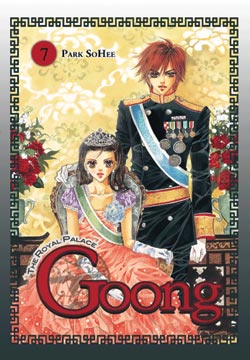 A fire in Daebi-Mama’s quarters sends the palace into an uproar, particularly the Queen who finds Daebi-Mama being relocated to her quarters by order of her husband. Meanwhile, Chae-Kyung overhears something that leads her to believe that Shin may have been responsible for the fire and is surprised by her impulse to protect him regardless of his actions. Still reeling from Shin’s public kiss during a recent press conference, things are made more uncomfortable for Chae-Kyung when the Queen Mother arranges for them to share a room on their class trip. Shin, finding himself intensely attracted to Chae-Kyung since their forced night together in the palace, is no more comfortable than she is, and though a string of misunderstandings and their usual stubborn pride keeps either of them from being completely honest about their growing feelings for each other, they come closer to in in this volume than they ever have before. Most surprisingly, as Shin becomes increasingly aware of both Yul’s ambitions and his own father’s stealthy maneuvering against him, he actually begins to push back, suggesting that he may wish to remain Crown Prince after all.

It’s quite a relief to finally see Shin taking some steps to open up to Chae-Kyung, even bringing himself to thank her when she rescues him from an embarrassing situation on stage in a student play. Whether this is due to a real desire to break down walls between them or just stark fear of losing her to Yul remains to be seen, but either way it’s a pleasure to see. Similarly, his speech to his father in the final chapter of the volume gains him new respect when it’s most needed.

Though it was easier to sympathize with Yul earlier in the series, it is now Shin who seems like the good guy (despite his dismal communication skills) and it will be exciting to see where things go from here, now that he’s really standing up for himself and those he most cares about. Most importantly, he finally reveals to Chae-Kyung the reason behind his early dislike of her and why his feelings have changed. “You looked right into my eyes and asked me so many things,” he says to her, in a flash of rare vulnerability. “You asked me if I ever went to Myungdong or to Dongdaemoon Market or if I’d ever watched a movie in a movie theater. When you talked about your life, I felt like my life was fake.” It is an extremely revealing moment we (and Chae-Kyung) have waited seven volumes to see, and the payoff is definitely worth it.

If last volume’s strife could be mainly chalked up to Shin’s inability to explain his feelings, in this volume the credit goes to Chae-Kyung’s inability to let him. Conditioned now to protect herself against Shin’s coldness as a preemptive measure, she’s having difficulty recognizing what’s changing in him enough to actually let it happen. Fortunately (or unfortunately) it looks like the two of them may soon be in a position where they must stick together just to survive, which will certainly be a trial for each of them as well as for their relationship. Watching the two of them slowly learn to truly care for and depend on each other is one of the best things about this series and though the pace may seem excruciating at times, it’s hard to imagine it playing out any other way.

Though this volume is less emotionally volatile than the last (despite the obvious drama of things such as Shin’s potential as an arsonist) the fact that it actually begins to veer towards romance at long last makes it a real page-turner of the very best kind. Goong continues to be one of the most compelling girls’ comics (Korean or otherwise) I’m currently reading, and definitely a personal favorite.