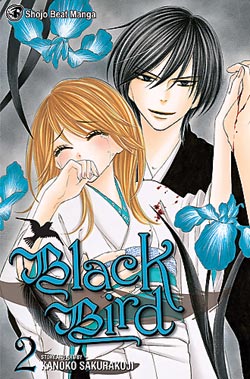 Misao Harada, already in the unpleasant position of having to depend on the dreamy yet controlling demon Kyo for her very life, finds things further complicated by the arrival of the rest of Kyo’s tengu clan. The new arrivals (all male, each prettier than the next) include Kyo’s older brother, Sojo, whom Misao also knew as a child. On the plus side, Misao finds out that Kyo fought to take Sojo’s position as head of the clan, presumably in order to marry her, lending additional credibility to his declaration of love. Unfortunately, deceptively mild-mannered Sojo turns out to be a pretty sick guy who will do anything to destroy Kyo and take back what was his, placing everyone’s lives in peril.

This is a fairly eventful volume that packs quite a punch, both in terms of romance and melodrama. Sojo is a truly hateful villain who even abuses adorable little tengu Taro and his brothers–the general equivalent of kicking an uncommonly cute puppy–making him incredibly easy to despise. Revelations about Kyo’s past with Misao and the memories that were erased from her mind by Sojo’s magic create a dark, romantic tone that would be difficult for any hot-blooded shojo fan to resist, despite the story’s sexually-charged violence. Unfortunately, this volume’s final chapter destroys the one thing that had, until this point, kept its misogynistic overtones somewhat in check.

In my review of volume one, I said that it was Misao’s clear view of her own situation that made the story palatable, despite Kyo’s deeply controlling nature. Misao knew that she was stuck depending on Kyo and hated it, highlighting both the poignance of her circumstances and her own personal strength, and presenting an opportunity for Kyo to be the one to change in order to be worth of her. This begins to erode early in volume two, as Misao falls further for Kyo’s charm and the bits of memories she’s clung to all these years. Still, it is possible to hang on as evidence mounts suggesting Kyo’s sincere intentions. Then everything falls apart all at once with a bit of internal monologue from Misao as Kyo unbelievably forces himself on her as a form of “punishment” for her behavior with his bishonen relatives.

He never has sweet words for me. He uses force to make me understand what he’s thinking. That’s why when he hugs me gently I can feel it. I get the message.

With these words, any hope of Misao remaining a strong heroine is lost and I suspect this series has lost me. Though it has great potential as a compelling piece of deliciously trashy shojo, I’m not sure it can come back from that. Prove me wrong, Black Bird?