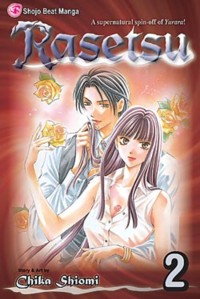 Marked by a demon as a young teen, tough eighteen-year-old Rasetsu Hyuga has two years left of her life before the demon claims her as his own, unless she is able to meet her own true love before her time is up. She is also a gifted exorcist who was taken in and nurtured by the head of the Hiichiro Amakawa Agency (a man referred to mainly as “Chief”), a company that offers exorcisms for a fee. Rasetsu is joined in her work by Kuryu, a master of koto dama, the power of words, and eventually by Yako, a former librarian with his own spiritual powers who was manipulated into joining the agency in the first volume. In volume two, Rasetsu’s terror of her fate shines through in a rare moment of vulnerability, prompting Yako to promise to be there for her on the fated day. Later, Kuryu plays around with his ability in an unusually insensitive way while also unintentionally revealing to Yako that he is much more powerful than he pretends to be.

Though the premise of this series is fairly unoriginal and its character development even less so, there is a certain comfort to watching its familiar scenarios play out that lends a particular charm and with the first volume’s exposition out of the way, Rasetsu is able to relax right into the task. It seems obvious that Yako is intended to be Rasetsu’s “true love” (Rasetsu even resembles his first love, guardian spirit Yurara from the series of the same name) and there are traces of this emerging already in volume two, at least on Rasetsu’s side. Kuryu, with his harmless, puppy-dog front hiding a potentially sinister power, is reminiscent of Tokyo Babylon‘s murderous veterinarian, Seishiro, casting a suspicious light on him immediately, especially after this volume in which he accidentally shows his hand. The series’ other characters, mysterious chief Hiichiro and cheerful office boy Aoi, are shojo staples as well, but quite fun and appealingly rendered, skipping off to enjoy rides at an amusement park while everyone else is working.

Fans of supernatural romance may not find anything new in Rasetsu, but tried-and-true formulas are alive, well, and downright agreeable here in its second volume.