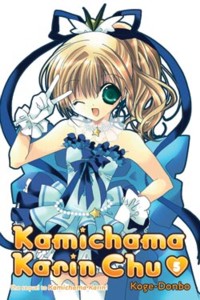 Karin, Kazune, and Michiru are cast as the Three Musketeers in the school play, which Karin hopes will be her chance to bring Micchi back into the fold as a noble god. Things don’t quite go as planned, but thanks to some help from Jin Kuga, who steps in as an understudy at a crucial moment, and the somewhat fortuitous appearance of a chaos seed, Micchi eventually realizes his true place is as a god. Reunited, the three young gods are lured to the beach by their enemy, Kirio Karasuma, where Suzune reveals an unexpected new form during a close call with a swarm of jellyfish. Unfortunately, that’s not the only surprise waiting at the beach, and the second is much darker, both for the gods and for Jin.

This volume gets off to a weak start with the Three Musketeers storyline, which brings Micchi back into the group much too quickly and easily to be believed. The second half of the book is much stronger, however, moving the plot forward and stressing the urgency of the gods’ unity, as well as providing some very touching moments between Karin, Kazune, and their future son, Suzune. The way this story plays with time—the strong glimpses these young characters are given of both their past lives and their future selves—is what maintains its emotional core, and it is incidents like the one with Suzune in this volume that most touch the heart and make the story into something more than its many clichés might suggest.

At its best, Kamichama Karin Chu is a delightful marriage of magical-girl formula and true pre-pubescent fantasy, straight out of the mind of any imaginative young girl. Though this volume falls just short of its best, its strong final chapters prove that this fantasy is still alive and well.