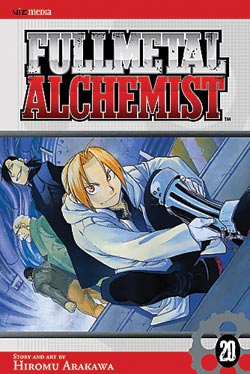 Falling victim to a double-cross, Envy tracks down Dr. Marcoh, only to walk into a trap that ultimately reduces him to his original, pre-humanoid form. “I know more about making philosopher’s stones than anyone else in the country,” says Dr. Marcoh, hanging mangled and bloody from Envy’s horrific tongue. “But because I know how to make them, I also know how to destroy them!” Afterwards, Scar entreats May to take the now-powerless Envy back to her country for study on immortality, though Envy does what he must to increase his chances of survival. Al, Winry, and the others then head out to the city of Lior, where Al is reunited with Rose as well as his father, Hoenheim, who finally shares the truth about himself, including a piece of information vital to the upcoming conflict. Meanwhile, Major General Briggs discovers the terrifying truth hidden in the bowels of Central City, and Ed–now recovered from his injuries–fails utterly to track down Al’s whereabouts, though he does encounter another long-lost companion with whom he forges an unlikely alliance.

This volume feels a bit like the calm before the storm. After the constant barrage of earth-shattering revelations contained in the past few volumes, Arakawa steps back to focus on relationships, but with an uneasy, anticipatory feel running like a strong current through each chapter. Not that this volume is lacking in new information, by any means. Both Briggs’ discovery and Hoenheim’s confession provide new insight into the homunculus’ ultimate plan, but these revelations seem intended to inform the characters rather than the reader, maintaining the story’s momentum at a strong, tense simmer, preparing itself to rise to a boil. That there is still a long way go to seems obvious, but during the volume’s final chapter, as a piece of key information spreads across Amestris from character to character, it feels very much like a final call to arms.

May’s story here is particularly poignant. Having become so much a part of the personal quests of some of the Amestrian characters (Scar’s and Al’s, in particular), her deep hurt in being urged to return home, even for the sake of her own people, is obvious and extremely touching. Arakawa emphasizes this by drawing her from angles which make her appear especially small, vulnerable, and occasionally off-kilter. With similar effectiveness, Arakawa also uses angles to help distinguish between the wildly erratic variations in the mental state of Greed, who is caught in an internal struggle between himself and Lin, whose memories still lurk within.

As a reader, the ground is always shaky whenever Ed and Al are apart from each other, adding to the mounting tension in this volume. Though it seems like the end must surely be near, this is a series that has never lost its momentum regardless of length, which makes me feel extremely reluctant to ever let it go. Fortunately I don’t have to just yet.

For long-time readers of the series, volume twenty provides further insight into characters both loved and hated, and continues to play out the complex plot so powerfully conceived from the series’ first volume. For everyone else, the time to start reading is now.