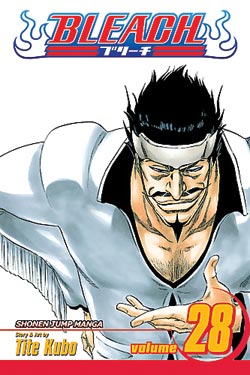 Ichigo, Uryu, and Chad face their first foes since their arrival in Hueco Mundo to rescue Orihime, but more importantly, they meet the comic relief, appearing in the form of a group of rag-tag Arrancar (considered “garbage bugs” by the higher-ranked types) seemingly led by a noisy toddler named Nel. Also joining the fight are Rukia and Renji, who arrive wearing capes provided by austere older brother Byakuya–an unusual gesture of kindness (not to mention insubordination) from him. Meanwhile, Orihime’s grim Espada guardian, Ulquiorra, explains how his apparent sympathy for Orihime (allowing her to put her affairs in order and make her secret goodbye to Ichigo) was a technique intended to break her will, which he arrogantly assumes has occurred. Orihime has other ideas, however, as she bides her time and makes plans to sabotage Aizen’s most dangerous tool.

While it’s fun to see Ichigo and Co. rallying for a fight, I’ll admit I already miss the characterization-heavy feel of the last two volumes as we head into what will obviously be a long stretch of battles ahead. It doesn’t help that Ichigo’s first serious opponent, a swaggering buffoon with devil’s horns and a thick, faux-Spanish accent (obvious even through translation) who refers to Ichigo only as “Niño,” is fairly grating from the start. Still, our warriors are happiest when they’re fighting and Nel’s menagerie is pretty cute, so it’s hard to complain. Orihime continues to be the most compelling character in the series, finally learning more about her own powers from Aizen of all people. I very much look forward to seeing how far her abilities extend and what they might mean for her future.

Though the initial batch of low-level opponents was easily dispatched and the first of the next batch isn’t terribly engaging, I can’t help but anticipate the group’s eventual encounter with the Espada, who are so far genuinely intriguing. Ulquiorra particularly, with his sober cruelty and harlequin-like visage, is of great interest to me. With any luck, the early battles will move swiftly to make way for more exciting enemies. Though Aizen and his top minions are more authentically “evil” than the characters our heros have fought before (most of whom have become beloved allies over time, via Kubo’s usual formula of battle with a side of tear-inducing backstory), they are certainly not dull by any means. Still, a strong concentration of Orihime is recommended to keep readers like me from wearying over the next few volumes. Let’s hope Kubo comes through!

Volume 28 of Bleach will be available on September 1, 2009. Review copy provided by the publisher.