Here on the penultimate evening of Girls Only Week, I talk about the most recent volume of my favorite long-running shonen series which just happens to be written and drawn by a woman. Is this a coincidence? One must wonder. Meanwhile, enjoy: 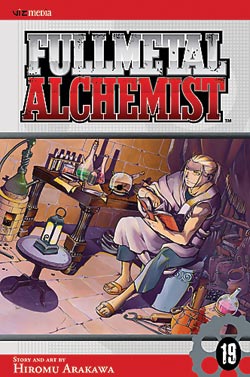 In this volume, Hawkeye reveals the truth about President Bradley’s son to Mustang, though he finds it impossible to believe. Ed is badly injured in the attempt to take down Kimblee and ends up purposefully disappearing along with a couple of Kimblee’s men. Finally, Al is discovered by Scar and Winry’s group in time to warn them away from Fort Briggs, though it isn’t long before he suffers a repeat of last volume’s experience in which he begins to feel pulled out of his body. All of this feels almost trivial, however, compared to this volume’s real story, which reveals the origins of Father and the homunculi (down to their names), as well as the distant past of Ed and Al’s father, Von Hohenheim, and the dark history they share.

This volume once again demonstrates Arakawa’s masterful skill as a storyteller as things fall into place so seamlessly one can’t help but feel a bit awed. That a series this long could be so intricate and well-plotted is fantastic enough, but Arakawa consistently raises the stakes for her characters in rather shockingly believable ways, creating a mixture of action, humor, and true drama that is continually surprising and emotionally resonant. If I seem ridiculously effusive about this series, I probably am, but that’s how I feel every time I emerge from a new volume and this volume really has a lot to offer.

It’s difficult to discuss in detail without giving away major plot points, but the history involving Hohenheim and the homunculi is fairly stunning and much more intimate than I had honestly expected. It is also quite horrifying, though it evokes a lot of sympathy for Hohenheim’s plight, if not quite for his position as an absent father. To illustrate just how dominant this story becomes in terms of impact, it is only now that I realize that by the end of the volume I’d forgotten how close Ed comes to actually possessing a philosopher’s stone, something I would have considered a major event in any other context.

Perhaps the revelation I found most exciting in this volume is actually the background behind the names of each of the homunculi–why they are named after (and apparently embody) each of the seven deadly sins, something that has always seemed a bit out of step with the philosophical tone of the series overall. The true explanation for this is nothing I could have anticipated and has shifted my feelings about this aspect of the story quite profoundly.

One mystery that continues to persist is the power behind the alchemy from Xing, how and why it differs from Amestrian alchemy, and what Hohenheim’s role is regarding both types. Discussion of Xing legend in this volume implies that he may have been the person to originally bring alchemy to Xing, which deepens the question further.

As someone who reads a lot of shojo manga with its wealth of artful paneling, I am consistently impressed by how creatively Arakawa is able to use the more straightforward panel layouts of shonen manga. The way this story flows from panel to panel is expressive on a level I don’t expect from boys’ manga, and I think that must play a part in why I find her action sequences so much easier to follow than most and why the emotional range of this story is so wide and nimbly managed. Both the humor and the drama in this series, even at their extremes, feel completely natural as the story flits deftly from one to the other and back again, sometimes in the space of a single page.

Even nineteen volumes in, this series does not falter–instead becoming increasingly moving and wrought with tension with each new chapter. Fullmetal Alchemist remains one of the best-told stories I’ve had the pleasure of reading.