We Were There, Vol. 5
By Yuki Obata
Published by Viz Media 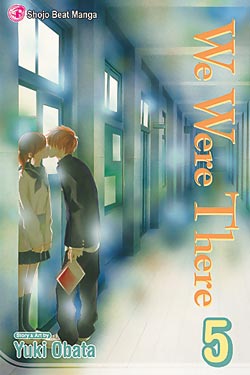 It’s been a week since Nana broke up with Yano and though Nana’s trying very hard to move on, Yano is really not doing well at all. A friend’s attempt to bring him on a group date is a complete failure, resulting in a drunken, late-night visit to best friend Takeuchi’s and a close brush with drunk dialing (or at least drunk texting). Things for Yano really don’t improve over the course of the volume either, as Nana is visibly irritated with his (admittedly weak) attempts to win her back, and Takeuchi takes advantage of Yano’s uncertainty over his feelings for his deceased ex in order to pursue Nana himself. Meanwhile, Nana is simply trying to get over her own heartbreak against all odds. The volume ends with a cruel cliffhanger, softened somewhat by an enlightening side story featuring a younger Yano and Takeuchi and the perils of unrequited love.

One of the most wonderful (and maddening) things about We Were There is that it absolutely refuses to have a villain. This is a big part of what makes it feel so real, though of course everything would be easier if it was possible to just hate someone and be done with it. This is, however, utterly impossible. Nana, Yano, and Takeuchi are all honestly nice kids who evoke genuine sympathy from the reader and there is no way around it. Far from a cold-hearted rival, Takeuchi, who genuinely cares for Nana, gives Yano every opportunity to tell her how he really feels about her, only finally going after her himself once he’s been convinced that Yano really hasn’t let go of his ex. Yano very obviously loves Nana and is just as confused about his lingering feelings for the girl he lost as anyone. Nana is clearly still in love, but unwilling to remain in what she views as a hopeless, hurtful situation and very honestly believes the break-up is healthiest for both of them. It’s impossible to vilify or even become vaguely irritated by any of them. More likely, you’ll just want to hug them all.

Different in tone from volume four’s stomach-churning anxiety and heavy foreboding, this volume feels bare, vulnerable, and gently sad. No matter what happens at this point, somebody loses and it’s hard to be okay with that. It’s also difficult to determine which is the best course for any of them. Last volume, I ended up sobbing uncontrollably over Nana’s plight as she came to the realization that Yano still loves his late ex. That in this volume I found myself kind of rooting for them to get back together puts me on pretty shaky ground, and also demonstrates the depth of the conflict and confusion presented here. Also sympathetic in this volume is Yamamoto, the often dour younger sister of Yano’s ex-girlfriend, who gives Yano some unexpectedly kind and insightful advice.

Once again, I’m impressed by Obata’s wispy, melancholy art style that so perfectly expresses the feelings of her characters and is so much responsible for the overall tone of the series. Mention must be made, too, of Nancy Thistlethwaite’s English adaptation which reads so beautifully–an especially important element in a series as delicate and emotionally complex as this one.

Now in its fifth volume, We Were There continues to be one of my very favorite current shojo series and in fact may resonate more deeply with me on a personal level than anything else I am reading.