Unsophisticated and Rude
By Momoko Tenzen
Published by DMP 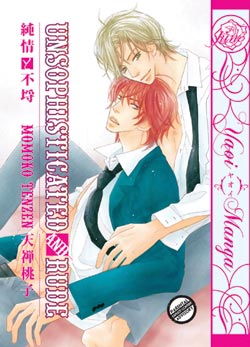 When Hiroto’s best friend, Satoshi, confesses that he’s fallen for another guy (popular upperclassman, Nao) it’s a bit of a shock, but not for the reasons Satoshi might have expected. It’s not the fact that Satoshi is crushing on a boy that bothers Hiroto but rather which boy. Hiroto, too, has always harbored feelings for Nao and in fact still struggles to deal with the memory of a drunken night they once shared, something he’s sure Nao wants to forget. Torn between friendship and love, Hiroto mainly tries to avoid being around Satoshi as he watches him getting closer and closer to Nao, but it is Nao’s true feelings that are the real surprise.

Unsophisticated and Rude is typical of many current BL releases in that it is an anthology of several short manga as opposed to one continuous story, the latter of which is definitely my preferred type of comic. Where it is not typical, however, is that every one of its stories is genuinely charming–a trait mainly due to its emphasis on characterization over all else, including sex. While most short BL comics gloss over whatever is necessary to get the two main characters in bed together, the stories in Unsophisticated and Rude are much more intricately crafted to create an emotional bond between the characters, occasionally even forsaking sex scenes altogether in order to fulfill that goal. I expect I may be in the minority for appreciating a lack of sex (or at least reduced sex) in a BL anthology but honestly when there is so little time in which to tell a story, if a choice must be made I’d rather have the story than the sex, something this group of comics thankfully takes to heart.

Again following in the footsteps of many anthologies, all of the comics here are love stories between students, though in this area too I feel this collection performs better than most. All of the relationships are entirely consensual and there is even an attempt made in several of the stories to address issues specific to gay teens. This is not to suggest that they are addressed thoroughly or even faintly well, but there is a sense that to some extent, the shroud of BL fantasy has been lifted, making way for more realistic stories between real characters than what is often seen. This is not to suggest that there is not a strong element of fantasy still to be found. Things between these characters sometimes work out just a little too easily to be truly believed and even some of the character’s personal details are highly questionable in terms of plausibility (such as the 30-year-old college student who is said to have obtained an earlier degree, gone off and become very, very rich, and now returned to school to study something new). Still, the emotions feel genuine throughout and the romance is so sweet, I don’t know how any fan could possibly resist falling for it.

What is perhaps most shocking about the fact that I so enjoyed this manga, is that the mangaka is Momoko Tenzen, whose anthology Manhattan Love Story, published earlier this year by DMP, contained an early story I found so offensive, I not only was unable to finish the book but actually threw it away, unwilling to pass it on to other readers. That this thoughtful anthology could come from the mind of the same author is not only stunning but makes me want to seek out more of her work to see if that particular story might perhaps be an anomaly.

Tenzen’s art is quite lovely and the anthology as a whole avoids the look-alike issue plaguing many of its kind. Each set of characters is nicely distinctive, both in look and characterization.

Though overall I will always have a preference for long, well-plotted stories over anthologies of short comics, this volume is very pleasing, both visually and otherwise, and provides a solid choice for BL fans looking for something new to read.

Unsophisticated and Rude will be available on August 29th. Review copy provided by the publisher.