This week’s Short Takes column focuses on three very different comics. The first, Black Bird (VIZ), is a supernatural tale about a young girl whose flesh is as prized among demons as Kobe beef is among salarymen. The second, The Girl Who Leapt Through Time (Bandai Entertainment), is a one-volume adaptation of the 2006 film (which, in turn, is an “update” on the 1976 novel of the same name). And the third is Ludwig II (June Manga/DMP), an overripe costume drama about Wagner’s most famous sponsor, Mad King Ludwig of Bavaria. 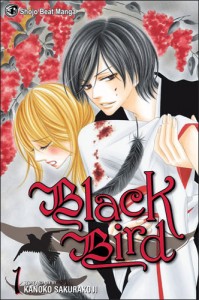 Since childhood, Misao has been cursed with an unlucky gift: the ability to see ghosts and demons. As her sixteenth birthday approaches, however, Misao’s luck begins to change. Isayama, the star of the tennis team, asks her out, and Kyo, a childhood friend, moves into the house next door, pledging to protect Misao from harm. Kyo’s promise is quickly put to the test when Isayama turns out to be a blood-thirsty demon who’s intent on killing — and eating — Misao. Just before Isayama attacks Misao, he tells her that she’s “the bride of prophecy”: drink her blood, and a demon will gain strength; eat her flesh, and he’ll enjoy eternal youth; marry her, and his whole clan will flourish. Kyo rescues Misao, revealing, in the process, that he himself is a tengu (winged demon) who’s also jonesing for her blood. Kyo then offers her a choice: marry him or die. Actually, Kyo is less tactful than that, telling Misao, “You can be eaten, or you can sleep with me and become my bride.”

And therein lies the main problem with Black Bird: the entire story revolves around its heroine’s repeated degradation. Demons slash her throat, poison her, push her off rooftops, and slam her against walls, yet she never defends herself or runs away, relying instead on Kyo to save her. Kyo’s “rescues” are as icky as the attacks themselves, as Kyo licks Misao’s wounds with abandon (he says he’s healing her; I say,  ewwwwwwww), pins her down, and browbeats her for not sticking close to him. Younger readers may find him sexy, but older readers will see him for what he is: a wolf in knight’s clothing, posing as Misao’s savior while manipulating her for his own selfish interests.

The bottom line: Yikes! I just can’t get behind a shojo series that presents controlling behavior as a sign of romantic love.

THE GIRL WHO LEAPT THROUGH TIME 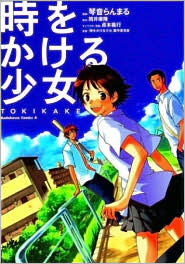 The Girl Who Leapt Through Time is a prime example of why anime seldom makes a successful transition from screen to page. This one-volume adaptation closely adheres to the 2006 film, in which Makoto Konno, an average Tokyo teen, discovers that she has the ability to time-travel after cheating death at a railroad crossing. Makoto initially uses her power to re-live the same afternoon over and over again, a la Groundhog Day, acing a quiz she’d failed on a previous try and engaging in a marathon baseball game with her friends Kousuke and Chiaki. As anyone who’s read “A Distant Sound of Thunder” knows, however, these leaps come at a cost, altering the flow of time in unpredictable and sometimes devastating ways. Alas, manga-ka Ranmaru Kotone’s dogged insistence on cramming as many of the original scenes as possible into the manga blunts the emotional impact of Makoto’s mistakes; there’s simply no space for character development or reflection when each leap is accorded just five or six pages. The story is so compressed, in fact, that readers unfamiliar with the film may find it impossible to follow the plot or make sense of the manga’s rushed ending, as it’s not always obvious from the illustrations that Makoto is moving back and forth in time.

The bottom line: Rent the movie and skip this hastily conceived adaptation. 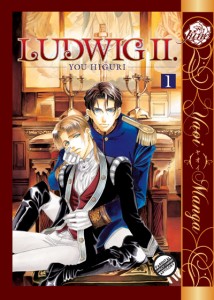 You Higuri’s costume dramas can be boiled down to three basic ingredients: beautiful people in beautiful clothes, political intrigue, and darkly handsome protagonists who are touched by madness. The other details vary with the historical moment being depicted, whether it’s fin-de-siecle France (Gorgeous Carat), Renaissance Italy (Cantarella), or, in the case of Ludwig II, post-Biedermeier Germany.

The darkly handsome hero of Ludwig II is the so-called “Mad King” of Bavaria. Ascending the throne during a period of escalating conflict between Austria and Prussia, Ludwig seems curiously detached from his military obligations, preferring instead to finance Richard Wagner’s operas, build elaborate Gothic castles, and re-enact scenes from his greatest obsession: Lohengrin. Make that one of Ludwig’s greatest obsessions — the other is Richard Hornig, a fair-haired stable boy whose graceful beauty irresistibly reminds Ludwig of Elsa, Lohengrin‘s doomed queen. Though Higuri populates the story with historical figures and alludes to real events such as the Seven Weeks’ War (1866), most of the drama in Ludwig II centers on the king’s passionate attachment to Hornig. As the king’s lover and confidant, Hornig frequently finds himself on the receiving end of violence: he’s stabbed, chloroformed, tied up, raped, and beaten by various members of the Bavarian court, not to mention his identical evil twin Fritz. (Fritz is so evil, in fact, that Ludwig can tell who’s who at a glance.) Oddly enough, however, it’s Ludwig, not Hornig, who seems perilously close to insanity, as the king has an increasingly difficult time distinguishing between fantasy and reality.

Higuri’s sensual artwork — her languid character designs, sumptuous interiors, and Wagnerian imagery — is the perfect vehicle for telling such an overripe story. Chapter five, for example, opens with a brief but arresting sequence in which Ludwig projects himself into the world of Lohengrin. In a few lovely, suggestive images — a swan’s beating wing, a knight’s helmet — Higuri reveals the extent to which Ludwig’s dream-like mental state has been shaped by Wagner’s music, hinting at its powerful, almost narcotizing effects. For a curmudgeonly feminist like me, however, the frequency with which Hornig endures sexual abuse diminished my enjoyment of the beautiful illustrations and historical subplots.

The bottom line: The pretty costumes and Wagnerian fantasy sequences are a feast for the eyes, but the icky sexual politics sent me running for the exits at intermission.