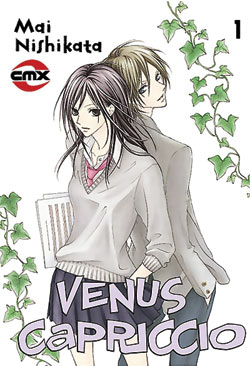 Takami is a tall, pretty second-year high school student and also a life-long tomboy. When her most recent date dumps her for not being feminine enough, she runs straight to her childhood friend Akira for comfort, just like always. Akira, whom Takami first met as a child in piano school, is two years her junior and an accomplished young pianist who regularly plays at a local jazz nightclub. Since Akira is as delicate and beautiful as a girl (with unusually fair features thanks to his half-Austrian heritage) Takami has always treated him like a beloved little sister. When it becomes clear that Akira–now grown into an extremely attractive and confident young man–has feelings for Takami, she is forced to recognize that he is not her “sister” after all. Though Akira’s confession makes Takami feel happy, she is not yet sure how she really feels about him so, they continue on as friends for quite some time. The more time Takami spends with Akira, however–now with her eyes wide open–the more she begins to recognize his true worth, though it takes the appearance of a few determined rivals to help her finally understand her own feelings.

With its awkward heroine and princely love interest, this manga is firmly rooted in shojo cliches, yet over the course of its first volume it meticulously pulls up each of those roots and hacks them off one by one. Takami is tomboyish, sure, but she isn’t trying desperately to change herself into the kind of girl she thinks boys will like. She’s frustrated when she gets dumped at the beginning of the volume, and though she does muse that if only she was more like Akira she’d never hear complaints about not being enough of a girl, she can only grudgingly concede when Akira explains that her real problem is just that she has “lousy judgement when it comes to choosing guys.” Akira is the embodiment of the perfect shojo prince–beautiful, elegant, self-confident, talented, and pursued relentlessly by other girls–except he’s also warm, attentive, and a really good friend.

The relationship between the two of them is very natural and well-established within just a few pages and their easy rapport is 180 degrees from the usual shojo childhood-friends-turned-lovers setup in which one of the two (usually the younger girl) harbors secret love for the other, resulting in a million awkward moments and ridiculous attempts to impress. In this scenario, Akira is the younger of the two and though he is the one to recognize his feelings first, he is entirely open and honest about it from the moment he feels old enough to appropriately express himself on the subject, without significantly changing his behavior towards Takami. Sure, being bold enough to kiss her is definitely something new, but he’s always been the one who knew exactly which song to play when she was feeling down–offering her support and open admiration regardless of what anyone else had to say about it. Perhaps what’s so extraordinary about these characters in a shojo manga is that their relationship is remarkably balanced–based on mutual admiration and trust. There are no games being played, no hidden agendas. They are just a couple of old friends trying to figure out the next step in their relationship together as best they can–no more, no less.

One of the most enjoyable aspects of this manga is watching the story’s main couple bump up against other shojo cliches. The princess-like rival looking for her prince, the school “prince and princess” competition, the ever-present fan club–all of these things come into play over the course of the story, but Takami and Akira stubbornly resist their standard roles regardless of others’ earnest efforts to persuade them otherwise. The rival is dismissed with barely any concern at all (“What do you like about her?” the girl demands in frustration, prompting Akira’s cold response, “You don’t have to know.”); the competition ends up turning into an opportunity for both of them to cross-dress while simultaneously sticking it to Takami’s jerky ex; and the fan club is completely shot down in the midst of their standard stalker behavior by Akira (who angrily tosses them locks of his hair while exposing their creepy logic for exactly what it is). All the games are set up but Takami and Akira refuse to play, which is more delightful than I could ever have expected.

Nishikata’s art is nothing special, but it’s nothing to scoff at either. The character designs are attractive and the visual storytelling is effective, easy to follow, and always comes through in the important moments. One of the best moments near the beginning of the volume occurs after Akira has hurt his hand threatening the jerk who dumped Takami at the beginning of the story (after he lashes out at Takami). Takami becomes angry, reminding him that she can take care of herself and referring to him as her “ideal girl,” at which point Akira dives in and kisses her. “Don’t be so obtuse,” he says. “I’m no girl.” The sequence is laid out exactly right and I thought to myself at the time (with my heart fluttering just as it should), “Whoa. That’s good romance.” It is moments like this that are most important in a good shojo romance and Nishikata has them down pat.

Perhaps there is nothing truly groundbreaking about Venus Capriccio. Teen romance between good-looking, likable characters is certainly nothing new. It is, however, a fun, refreshing take on standard shojo manga, and a genuinely enjoyable read.

Volume 1 of Venus Capriccio is available now. Review copy provided by the publisher.