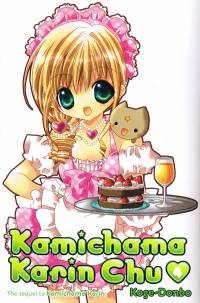 In volume three, Karin had a dream that showed her a vision of the future featuring the horrible deaths of those she loves most. As this volume begins, she struggles to carry on with daily life while holding on to this painful truth that she believes she must keep to herself. After a blow to her head gives everyone a scare, Karin finally confesses the details of her dream to Kazune and he determines that together they must find a way to change it. Unfortunately things go rapidly downhill from this point on. After hearing about Karin’s dream, Micchi decides to give up his position as a god for good; Himeka, Kazune’s cousin who has just returned to them, is kidnapped by a mysterious and sinister girl; and new, shocking truths about their idol friend, Jin Kuga, are revealed.

Though this series is impossibly complicated and almost disturbingly cute, it’s hard not to be compelled by the overblown emotional drama and layers of supernatural intrigue. Time travelers, reincarnation, cloning, and magical girl-gods are the stuff of fantastic shojo, and if this series doesn’t quite come together like the best shojo fantasies, it is certainly fantastic in the most basic sense of the word. This volume’s drama is particularly thick with everyone fighting against their own fated deaths, but the over-the-top whimsy keeps things from ever becoming too heavy and the prevailing mood is oddly fun. A little romance never hurts either.

Dramatic, frilly, and a little bit trippy, the fourth volume of Kamichama Karin Chu provides a colorful mix of shojo staples in a super-cute package.