Her Majesty’s Dog, Vol. 2
By Mick Takeuchi
Published by Go!Comi 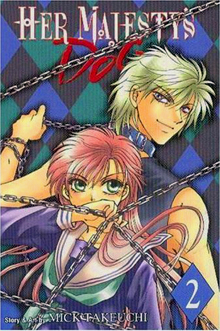 This volume begins by revealing that Takako’s memory wipe (intended to make her forget Amane and Hyoue’s true identities) really did not take, leaving Amane in the position of having to decide whether to try again, something she really does not want to do. The decision made here reflects their growing friendship and starts the volume off in a very touching manner that persists for much of the volume. The main story here revolves around another Koma-oni, Zakuro, who once served the same master as Hyoue. Driven by hurt and jealousy, Zakuro tries to steal Amane away for himself, but again the conclusion to this story is surprisingly moving and reinforces the relationships between the series’ primary characters.

Though I have concerns about how its premise can last over the course of this long series, at this point I’m still quite impressed by its expressiveness and ability to evoke emotion. Just two volumes in, the personal ties between characters are already wonderfully rich and I find myself anxious to see how they might grow further. Takako’s solution to the problem of Amane’s fear that she might end up controlling Takako with the power of her words (giving her a nickname to call her by, thus eliminating that danger) actually brought tears to my eyes, moving me just as much as Amane. Zakuro’s story similarly touches the heart and though it ends quite tragically, the effect on Amane and Hyoue–the characters in which we have a real stake–is incredibly heartwarming.

The real question left hanging at this point in the story is what is this manga really about? There are so many fantastic elements–both in characterization and premise–but the focus remains in question, particularly when considering Hiraka’s presence, which seems to have become quite benign, considering how he was introduced. Is this going to be a story of romance? Friendship? Supernatural intrigue? I’m not suggesting it has to become any one of these things, but there is a nebulous feel to the series that makes its future feel a bit shaky.

That said, this is a really strong volume with a lot to offer and I can’t help but recommend it. Wherever this series may be going, where it is right now is pretty fantastic.