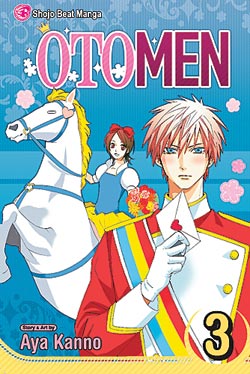 As this volume begins, Ryo asks Asuka to help her out at a nursery where she often volunteers. At first, Asuka is concerned that he must maintain a manly image, but the loneliness of a young boy in the group ends up bringing out Asuka’s feminine side, and in the end he wins the boy over with both his “girlish” skill in crafts (together they make adorable dolls from broken eggshells) and his “manly” physical prowess (he saves the boy from falling out the window). Also in this volume, Asuka takes Ryo to an amusement park hoping to get up the nerve to tell her his feelings; Juta is hiding more than just his career as a shojo mangaka; and Asuka finds out that his greatest rival in kendo keeps a secret of his own.

A particular treat in this volume is a deeper look at Juta, whose cheerful, womanizing persona is hiding a lot more stress and responsibility than he has ever let on. Also, one of the subplots in this volume involves his harem of school girlfriends scheming to find out if he’s hiding a favorite, and it’s hard not to come to the same conclusion they eventually do–that his favorite is Asuka. Juta’s vision of him as the “perfect girl” makes one wonder if the real reason he hasn’t ever chosen a girlfriend is that none of the girls can manage to live up to that ideal.

The real keys to this manga’s success are its art and its humor. It’s the details, really, in both cases. Things like Asuka’s consistently stoic, sincere expression and his tiny idiosyncrasies (such as accidentally embroidering an elaborate flower on Juta’s shirt while mending it) are what make this manga so charming.

Volume three of Otomen will be available on August 5th, 2009. Review copy provided by the publisher.