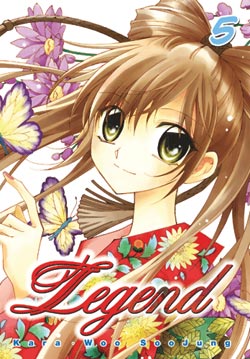 As this volume begins, No-Ah is still recovering from his nearly lethal encounter at the end of the last volume, and as she watches over his sleeping form, Eun-Gyo wonders for the first time just how difficult No-Ah’s path has been. Though No-Ah’s poison-induced injury seems to heal with miraculous speed, Eun-Gyo has found a new determination to protect him instead of the other way around. Refusing to be protected, No-Ah stubbornly heads off on his own, unfortunately leaving the window open for a new enemy to sweep in and capture Eun-Gyo. The enemy takes the form of deceased customs officer Sook-Chung Park, but his true identity is far more disquieting.

While I’m not yet completely hooked on this series, this volume is a great step forward in terms characterization which is always the greatest draw for me. I’ll definitely look forward to volume six.

Volume five of Legend is available now. Review copy provided by the publisher.