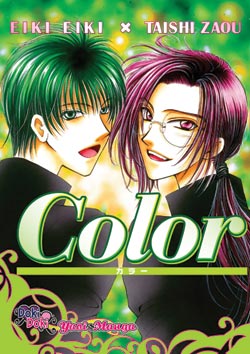 Takashiro is a young art student whose painting, “Color,” has been chosen for display in an exhibition of amateur works at a local gallery. When he arrives at the gallery to view his painting (bumping into another boy on the way in), he is shocked to discover that hanging right next to it is a strikingly similar painting with the identical title. Eager to meet the artist, Sakae Fujiwara, who so obviously shares his sensibilities, he rushes to confront the gallery owner, only to find that the other artist has just left the exhibit. The gallery owner lets him know, however, that the other artist (whom he refers to as “Sakae-chan”) is planning to attend the same prestigious Tokyo art high school as Takashiro, leaving Takashiro anxious to pass his exams and begin classes where he can finally seek out this person who seems to have a window into his soul. After his school exams, Takashiro (literally) runs into the same young man he encountered that day at the art gallery. Laughing at the coincidence, the two walk together to the bus stop, becoming fast friends. The other boy’s bus arrives and he hurries to jump aboard, but not before leaving Takashiro with his name: Sakae Fujuwara.

I’m always impressed when a writer (or writers, in this case) can make a whirlwind romance actually feel plausible, especially in BL where this success seems so rare. This romance not only feels completely plausible, but honestly inevitable. The nature of the bond between Takashiro and Sakae screams “true love!” from a hundred miles away and I think it would have seemed forced for romance to not happen. Their fast-developing friendship is extremely well-written and utterly charming. After their dramatic introduction on the first day of school, the two of them spend nearly all their time together–in class, at lunch–communicating easily in half-sentences that nobody else understands. The other students are both fascinated and irritated by the boys’ quick closeness, and their perspective is a great tool for moving the romance along smoothly and easily. If Takashiro and Sakae are perhaps somewhat unaware of how special or unusual their relationship is, that does not apply to anyone else. That by the end of the story (which skips several years in the middle) these students have come to accept their relationship as just another fact of life and even wish to protect it (“When the two of you aren’t together, it throws us all off!” “Yeah, it’s like they come as a set!”) is not only heartwarming, but also feels very true-to-life.

Something else that works very well is the way both Takashiro and Sakae pursue the relationship. Though the writers joke around about who’s the seme and who’s the uke, the usual elements of that dynamic are completely absent from the manga. Both boys are equally interested in each other sexually, and though the more outgoing Sakae is portrayed more often as the initiator of new things, he’s never suggesting anything that Takashiro hasn’t already thought about and desired on his own. Keeping Takashiro as the POV character works very well in this way, since his expression is most often internal. Takashiro is often nervous about taking new steps, but this nervousness never holds him back from grabbing opportunity when it arrives.

Often at this point I’d go on about the characters’ deep backstories and so on, and though they both do have poignant stories that bring depth to the art that drew them together in the first place, the real heart of this relationship is in the present. Though their past made them who they are, to each other they simply are–a point made beautifully by Sakae in the second half of the volume when Takashiro finds out about Sakae’s upbringing for the first time–and that feeling extends to the reader as well. Though their backstories are moving and well-told, they almost don’t matter, because the real joy is in watching the two of them together now. If there is one thing that seems oddly missing, it is any real discussion of themselves as artists while they are studying in school together, but perhaps the writers were smart to use their limited page space to focus just on their relationship, which they have done so well.

The art in Color is not especially extraordinary, but it is attractive and expressive and those things are most important in a romance. The character designs shift somewhat over time, due to the large gaps between chapters during its original serialization, but that actually works quite well for the story, considering its leaps in time. The extensive omake pages in the back provide a special and unexpected treat. Not only are the four-panel sections genuinely funny, but the retelling of the manga as the story of the two mangaka meeting and working together is extremely fun and quite enlightening.

This review has become long and yet I feel like I’ve just barely begun to describe all the things that are charming about this manga. It is not often that I find myself recommending a single volume BL story so heartily, but Color is simply a delightful read–recommended for both fans of the genre and new readers who may become fans. In the world of yaoi manga, Color is a gem.

Color will be available on July 8th, 2009. Review copy provided by the publisher.