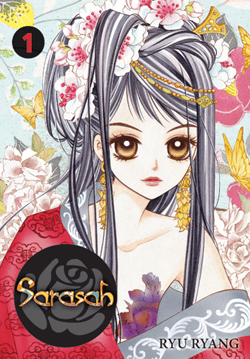 High school student Ji-Hae has an obsessive, long-time crush on her classmate Seung-Hyu. She pursues him relentlessly–so much so that she’s pushed him to the point of utter disgust. When her elaborate birthday scheme (involving an enormous banner, a hall full of floating feathers, and a note reading, “You are mine. You can’t get away.”) finally pushes him to the brink, he accidentally pushes her down the school stairwell to her probable death. Ji-Hae finds herself waking in a new world, where she is told that it is not yet her time to die and that she must return to the living world. Horrified by the prospect of returning to a life of humiliation and unrequited love, Ji-Hae begs to be able to just stay dead, but instead is granted the opportunity to return to a former life–the original source of her discord with Seung-Hyu–to rewrite her soul’s own history in hopes of earning a second chance at love.

Fortunately, there is enough potential here to easily balance out the main characters’ rocky start. It’s easy to see the potential for conflict in Ji-Hae’s past. As the daughter of a nobleman, her behavior and appearance are strictly monitored–something she unknowingly messes with from the moment she arrives, by immediately cutting off her “annoying” long hair. It’s fun to watch brash, modern Ji-Hae burst in on this world as though it was a dream–stubbornly pursuing her immediate objective by flouting the restrictions her family attempts to impose, with little to no thought given to how her behavior might potentially affect the plight of her future self, let alone the version of herself whose life she has suddenly claimed as her own. This is, of course, the same kind of reckless single-mindedness that causes so much trouble in her present-day life, which makes one wonder if perhaps the objective truly intended for her is to figure out exactly this so that she can take the lesson back with her. Perhaps, too, she will finally discover a reason to admire Seung-Hyu for something other than his physical beauty, which is the only thing she honestly seems to value about him (and admittedly the only thing he obviously has to offer).

Manhwa-ga Ryu Ryang creates some nice backgrounds and luscious costuming for the story’s period setting, but the character designs are mainly bland and glassy-eyed, providing my first real bit of insight regarding some readers’ issues with manhwa art. The most expressive face in the bunch is reserved for Mita, whose design is completely adorable all around. Where the character designs falter, however, characterization picks up the slack. Though Ji-Hae may not be precisely likable, she is consistent and oddly fascinating in her utter lack of awareness of both herself and how her behavior affects others.

Though its first volume does not fully succeed on all counts, Sarasah still makes a strong impression and offers enough mystery and intriguing characterization to easily entice me towards the next volume.

Volume one of Sarasah is available now. Review copy provided by Yen Press.