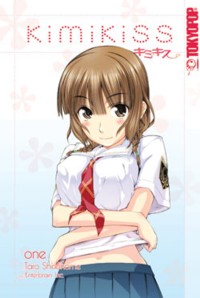 Kouchi and Mao have been friends since childhood, but now that they are in high school, Kouchi is depressed that he hasn’t managed to attract a girlfriend. Mao offers to help him become a “real stud” by teaching him how to be attractive to girls, beginning with lessons in kissing. The lessons start to get a bit steamy, especially after Mao is invited to sleep over with Kouchi’s little sister, resulting in a late-night tryst in Kouchi’s bed. On a later trip to the local pool, Mao really turns up the heat, but when she notices Kouchi talking to another girl, she realizes that her time with him may be over. Fortunately, Kouchi realizes that the girl he really likes is, in fact, Mao, something he finds the courage to tell her just in time.

Based on a PS2 dating sim, it comes as no surprise that the story’s plot is unoriginal and generally predictable. Unfortunately, KimiKiss is even more disappointing than might be expected. The humor is embarrassing (“Heh, heh, your balls are huge!,” Mao says, referring to Kouchi’s riceballs as they picnic by the pool), the art is dull, and even the plentiful fanservice—the series’ one potential draw—is nothing that hasn’t already been thoroughly explored by a thousand 1980s teen films. Following its cardboard characters through pages of generic dialogue and lifeless plot is honestly excruciating, and even the hero’s sweet sincerity is unable to save the day. Overall, KimiKiss is a series best missed.