This week’s Short Takes examines two manga aimed at adult audiences. (Notice I didn’t say “adult manga,” which is a different kettle of fish altogether, and not the sort of thing I typically review. Just sayin’.) The first is The Kurosagi Corpse Delivery Service (Dark Horse), a macabre series about a five oddballs who work with the recently departed; the second is Oishinbo a la Carte: Japanese Cuisine (Viz), a mouth-watering look at Japanese cuisine, from sushi and sake to ramen. 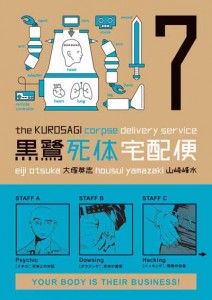 The Kurosagi Corpse Delivery Service is comprised of five members: Karatsu, a Buddhist monk-in-training; Numata, a hipster with an encyclopedic knowledge of Japanese pop culture; Yata, an odd duck who communicates primarily through a puppet that he wears on his left hand; Makino, a chatty embalmer; and Sasaki, a hacker with an entrepreneurial streak. Together, this improbable team of twenty-somethings help restless spirits find peace, using their various supernatural gifts to locate bodies, speak with the dead, and resolve the spirits’ unfinished business. Perpetually cash-strapped, the crew takes whatever odd jobs Sasaki can book, often discovering new “clients” (i.e. corpses) in the process.

Volume seven features three “deliveries” (a.k.a. short stories). In the first, Karatsu and Numata clash with a video gamer whose corpse has been stashed inside a robotic suit; in the second, the gang meets a plastic surgery patient who’s afflicted with a jinmenso, or ghostly tumor with a human face; and in the third, Makino accepts a job as a make-up artist on a movie set, only to discover that the assistant director is going to extreme lengths to achieve realistic performances from the cast. Though all three stories have a similar rhythm, Eiji Otsuka delivers enough gruesome surprises and black jokes to keep the series’ Scooby Doo premise afloat. The first story, for example, pokes fun at otaku culture with digs at gamers, zombies, and mecha manga from Gundam to Mazinger Z. Nerds are an easy target, to be sure, but Otsuka wrings some fresh laughs from the material, staging an epic battle inside a shopping mall that caters to otaku. (George Romero would be proud.) Housui Yamazaki’s impeccable drawings are the perfect compliment to Otsuka’s over-the-top storylines, depicting the action in a clear, deadpan style that makes the most ghoulish moments wonderfully absurd. Tying the whole package together are editor Carl Horn’s extensive notes, in which he and translators Taylor Engel and Toshifumi Yoshida decode the sound effects, explain cultural references, and discuss Tokyo neighborhoods, revealing new layers of meaning in the stories and letting us in on some of the subtler jokes.

A final tip: you don’t need to read the volumes in order — or even all of them, for that matter — to enjoy The Kurosagi Corpse Delivery Service, though I highly recommend all nine volumes. 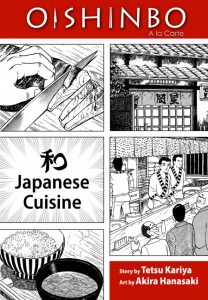 Since its 1983 debut in Big Comic Spirits, Oishinbo has proven wildly popular in Japan, selling millions of copies and inspiring two movies and a television show. Viz faced a challenge in bringing Oishinbo to American audiences, however, as the series now spans 102 volumes; even the most fanatic sushi lover or sake aficionado could be forgiven for not wanting to buy so many books. As they did for the similarly voluminous Golgo 13, Viz adopted a “greatest hits” approach, licensing the A la Carte edition rather than the entire series. Each of the seven volumes focuses on a different element of Japanese cuisine: ramen, gyoza, pub food, and even rice get a turn in the spotlight.

The first volume provides an introduction to Japanese cooking and to the series’ principal characters, Yamaoka Shiro and Kaibara Yuzan. Shiro, a lazy, sarcastic reporter with an unusually refined palate, lands a plum assignment from the publisher of The Tozai News: to assemble the “Ultimate Menu,” a meal epitomizing Japanese cuisine. Hindering Shiro’s efforts is Yuzan, a blustery gourmet who’s every bit Shiro’s peer when it comes to preparing and evaluating fine food — no surprise, given that Yuzan is Shiro’s father. The two cross paths frequently, trading barbs and upstaging one another with voluble displays of obscure culinary knowledge.

Reading Oishinbo is both a treat and a chore: a treat, as each dish’s ingredients and preparation are discussed in loving — one might say p0rn0graphic — detail, and a chore, as most of the drama revolves around Shiro and Yuzan’s confrontations, which grow tiresome quickly. Compounding the sense of dramatic inertia is the fact that the stories have been assembled to fit the theme of each volume, rather than the original chronology of the series. Though largely self-contained, the stories lack an organic connection to one other, leaving the reader to guess at Shiro’s relationship with two characters who appear throughout volume one: Tomii Tomio, his boss, and Kurita Yuko, his partner on the Ultimate Menu project. (As we learn from the character guide, Yuko eventually marries Shiro, something that seems less-than-obvious from the way they interact in the A La Carte edition.)

Akira Hanasaki’s art is serviceable, if a little crude. His figures are cartoonish, a la Tezuka, but the food is drawn clearly, allowing us to see how it’s prepared and, perhaps more importantly, how and where it’s consumed. I finished volume one eager to try some of the dishes — especially seabream sashimi — and hungry for more information about other Japanese delicacies.