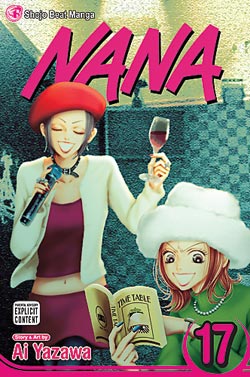 “But now I just want one thing… the courage to face things once more.”

This volume begins in the future timeline, with Hachi meeting Shin at apartment 707 during the Christmas season where she discovers an envelope left in the mailbox containing photos of Nana singing in a faraway club. The scene is unexpectedly moving and it put tears in my eyes right from the beginning of the volume which never truly disappeared. Though much of this book focuses on the storyline begun in in the volume sixteen regarding Nana’s biological mother and the related Search exposé, what this volume really does is bring Nana and Hachi back together–something guaranteed to fill my heart with joy. Having been manipulated by the Search reporter into confronting Nana’s mother (though this confrontation is ultimately fruitless), Hachi first spends some time hiding out at her parents’ house in shame, but once the story finally hits she runs straight to Nana’s side, much to everyone’s relief. This volume also takes a surprisingly frank look at Mai’s past, including how she became “Misato Uehara,” and delves more deeply into the complicated relationships between the members of Trapnest, focusing on Reira in particular.

Shin continues to be an especially fantastic character, and I’m constantly impressed with the layers Yazawa has created in him. His reaction when he finds out that Hachi rushed in to take care of Nana (a very simple, “Well, all right then.”) is somehow one of the best things in the whole volume. Always probing into the motivations of others, he is the first to understand why Nana might not be particularly affected by news of her mother’s selfishness (“But that’s just how someone who’s attached to their parents would feel,” is his response to Nobu’s protests). Nobu, so different from Shin in his easy warmth and persistent faith in his fellow humans, shines in this volume as well–filling my Nobu/Hachi ‘shipper’s heart with glee. Yasu, too, has some very nice moments and provides some rare insight into his feelings about relationships.

The Trapnest drama is mainly pain-inducing and the contrast between its member’s twisted feelings for each other and Blast’s mildly incestuous warmth has never been made more clear. “‘Trapnest’ means a motherly nest that comes with a trap. Once you’re in there, you can never get out,” Nana says early on in the series (continuing on with, “It’s a typical name that a guy who’s afraid of strong women would think up.”) and it really does seem that these three (Reira, Ren, and Takumi–somehow Naoki is immune to it all) are genuinely trapped by their mutual history. Though I realize that my own issues with Takumi always color my reading, even I can see that this mess is not solely caused by him (though I’d still like to punch him in the face every time he cheats on his wife). Reira, too, has always been difficult for me to love, with her overwhelming beauty and her often careless heart, but I feel a lot of sympathy for her here as she struggles with both the damage she’s done and what’s been done to her.

Ultimately, though, this volume is all about Nana and Hachi, and even though it’s obvious that tragedy is to come, I can’t help but savor the moment. This is a wonderfully heart-wrenching volume in a series that never fails to move me.