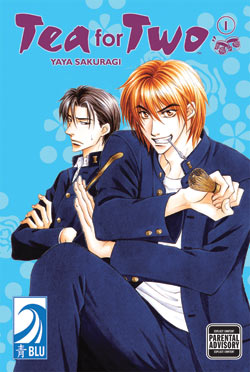 Madoka Tokumaru is, to put it simply, a spaz. He is verbally crude, physically out of control, and lacks grace and composure on every level–something his sister is certain can be cured by forcing him into their school’s Tea Ceremony Club. Fortunately, the club’s president, Kazuma Hasune, whose family maintains the tea ceremony traditions, is up to the seemingly impossible task. Madoka’s progress is slow. He is crude, clumsy, and has difficulty maintaining seiza for any period of time. Still, as the school’s cultural festival rolls around, Madoka is deemed presentable enough to put on a kimono and serve tea.

Madoka’s newfound composure is quickly broken, however, when he discovers that some students are taking advantage of the festival chaos to rob the Tea Ceremony Club room of its valuable teacup collection–specifically Kazuma’s personal cup, which, despite being of lesser monetary value than any others in the room, has great sentimental value for Kazuma. Determined to retrieve the cup, Madoka chases after the culprits and gives them a sound beating, only to drop the cup himself immediately upon his return. Devastated by his failure, Madoka falls to pieces, but Kazuma is touched by his actions and thanks him warmly. This is really the beginning of a closer relationship between the two and as the first volume continues, Modoka and Kazuma begin to fall in love, though it requires some encouragement from Keigo (an openly gay friend of Kazuma’s) to really loosen up Kazuma’s heart and get things going.

Volume two follows the protagonists as they face questions about their future. Madoka feels directionless and Kazuma begins to question his place as the future head of his family, where he is expected to take over the tea ceremony. Adding further complication is the return of a close friend of Madoka’s who has been living overseas and who inspires some jealousy in Kazuma.

Though this series isn’t remarkably original or groundbreaking in any sense, it is a very satisfying romance story which bests much of its genre by actually discussing the characters’ sexuality in clear terms, at least by its second volume. Though initially appearing to play into the tired female fantasy of two (one, at the very least) apparently straight schoolboys falling in love with each other, as the story continues, the two not only must face how their relationship is viewed by family and friends and how it affects their future, but they even have a conversation about it in which they actually use the word, “gay.” Though it is sad that this is such a rarity in a boys’ love story, the reality of it makes this manga a rare jewel. That said, the mangaka does pull a cop-out by making most of the story’s queer characters actually bisexual (including the two protagonists)–Madoka even continues to ogle girly magazines after he begins a sexual relationship with Kazuma–though this only costs her a few points. 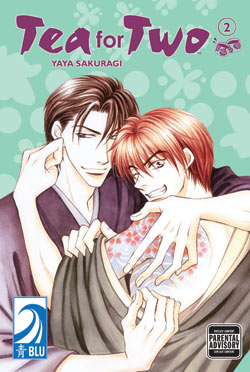 Speaking of gay characters, though the story’s primary relationship is quite touching and definitely a satisfying read, the real gem of the series is Kazuma’s friend Keigo, whose relationship with an artist who illustrates erotic novels begins as a side story in the first volume and continues into the second (actually culminating in a joke about the lack of “realism” in yaoi). Keigo is flamboyant and fun and serves as a sort of mentor for Kazuma who is too serious for his age. “Let me tell you something, Kazuma-kun,” Keigo says, supposedly discussing the broken cup but obviously hinting at deeper things. “Even when you think you’re taking good care of something… if it’s cracked, someday it’s going to break. You should fix things before it’s too late.” Though he never becomes more than a supporting character, it is his presence that really makes the story work–providing much-needed insight and offering a role model for both Kazuma and Madoka, neither of whom are as comfortable with their sexuality and what it means for them as Keigo is.

This is not to belittle either of the story’s protagonists. Kazuma is quiet and intriguing–deeply serious and afraid of letting either his youth or his fears show. When he experiences second thoughts about his career path, it is really quite moving and dramatic, and it’s nice that even at the end of the second volume nothing has been truly resolved there except for the fact that it does not yet need to be. Madoka is brash and wonderfully honest, and he provides much of the story’s real truth as well as a lot of its humor. Humor is actually one of this series’ best strengths and manifests itself with a sense of subtle whimsy unusual for this kind of manga (Madoka exclaiming, “I’ve just never seen a real gay couple before,” while wearing a shirt that says, “Buttocks,” is an oddly funny moment).

Though the story’s character designs are not especially attractive, they are at least distinctive and there’s never a question of telling the characters apart. The art overall is very nice, however–expressive, detailed, and easy to follow.

Tea for Two may not be an epic masterpiece, but it is down-to-earth, funny, occasionally sexy, and above all, a nicely nuanced romance. Though the two volumes published here stand very solidly on their own, it is exciting to note that a third is scheduled for December of this year, possibly answering some of the questions left open at the end of the second volume–something for boy’s love fans to truly look forward to!