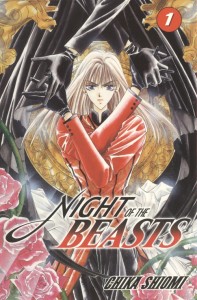 Night of the Beasts may not be Chika Shiomi’s best work, but it’s certainly her most ambitious, a sweeping horror-fantasy with detailed artwork and nakedly emotional dialogue reminiscent of CLAMP’s Tokyo Babylon and X/1999 .

When we first meet Aria, Night’s tough-talking, high-kicking heroine, she’s engaged in her favorite activity: beating up boys. Nasty boys, to be precise—Aria has a reputation for defending other girls from perverts, bullies, and overzealous flirts, both at school and on the streets of Tokyo. A self-professed man-hater, Aria blames her mother’s untimely death on her ne’er-do-well father—who abandoned the family shortly after Aria’s birth—and on her mother’s lecherous co-workers—who hassled the poor woman into an early grave. (What, exactly, Aria’s mom did for a living is never spelled out, and by volume two, Shiomi seems to have forgotten about the character altogether.)

Aria’s life takes a turn for the dramatic after she bumps into the handsome, smooth-talking Sakura. Though an inner voice cautions her to run away—generally a good idea when you meet a stranger at a gruesome crime scene—Aria feels powerfully drawn to him. The two discover that they’re members of a far-flung clan, all descended from a demon-slayer named Mikage who, four hundred years prior, clashed with Kagara, a blood-thirsty demon. Though Mikage bested Kagara, the demon cursed Mikage’s descendants, vowing to return and slay all four thousand of them in a single night.

That curse is on the verge of coming true, as Kagara’s spirit has rematerialized within Sakura’s body, gradually turning Sakura against his own kin. Only one thing can stop Kagara: Aria’s touch. Ignoring repeated warnings from other clan members, Aria begins trailing Sakura wherever he goes, administering hugs and tender words whenever his inner demon surfaces, an increasingly risky proposition as Kagara grows stronger within his host.

I’d be the first to admit that volume one is a hot mess. Chika Shiomi grossly overplays Aria’s tough-cookie persona, staging several improbable fistfights and putting comically bad dialogue into her heroine’s mouth. (Sample: “I swear, men these days are just getting lamer and lamer! Every single one of ‘em!”) In fact, tin-eared dialogue pervades the first four chapters, as characters explain their histories, discuss demon lore, and remind one another how they met. The tone see-saws between broad comedy and horror—the overall feeling is Clueless crossed with an M. Night Shalyaman movie, as scenes of supernatural carnage are interrupted by Aria and Sakura’s flirtatious fighting. 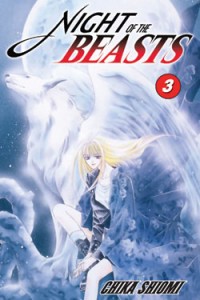 As the story progresses, however, Shiomi develops a firmer grasp on her characters. Aria, in particular, undergoes a steady transformation from junior league Pam Grier to proper shojo heroine — the kind who sheds copious tears and doubts herself, yet musters the strength to defend her loved ones. Though Night of the Beasts focuses on Aria and Sakura’s doomed romance, Shiomi squeezes more emotional juice from Aria’s partnership with Kuguri (pictured at left), a dog spirit who’s still loyal to Mikage, her original mistress. Aria and Kuguri form a powerful bond that mimics this earlier relationship. Their eventual parting yields the series’ most wrenching, real scene — if it’s possible to have a “real” moment between a demon slayer and a winged dog spirit — that makes Aria and Sakura’s angst-ridden conversations seem tepid in comparison.

Shiomi’s artwork is attractive, though a bit dated. Like the cast of Tokyo Babylon and X/1999, Aria and Sakura favor elbow-length gloves, trench coats with cape-like tails, and hats last seen on Boy George in 1984. Their physiques, too, scream mid-nineties shojo: Sakura is impossibly tall and broad-shouldered, with a razor-sharp chin and tiny waist, while Aria’s long, windswept hair is a character in its own right.

Shiomi’s action scenes are a similarly mixed bag, conveying the mood and emotion of the moment more effectively than the actual combat. In the sequence below, for example, it’s awfully hard to figure out what, exactly, Sakura is doing to the large demon that’s attacking him: 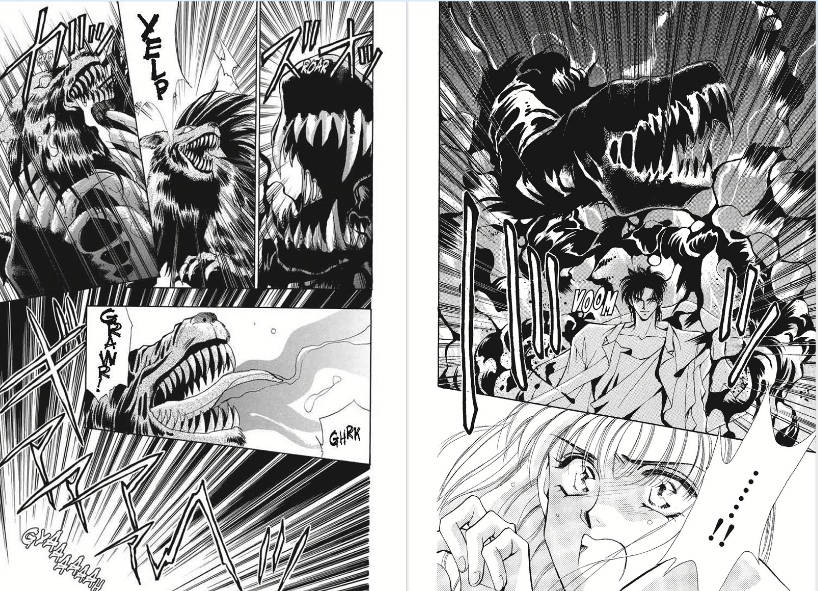 Is he slicing it in half? Swatting it away like a fly? Giving it a high-five? The four trapezoidal panels on the opposite page don’t shed much light on the situation, as they also invite several readings: is the demon is regrouping before its next attack, or is it convulsing in pain?

Whatever the limitations of Shiomi’s style, it gets the job done; her artwork plays a vital role in establishing the story’s doomed, Romantic atmosphere. If you can solider past Night‘s weak first volume, you’ll be rewarded with an engrossing supernatural fantasy that packs an emotional wallop in its final chapters.

This review is based on complimentary copies provided by Go! Comi for the purposes of a review. I have not received any form of compensation from Go! Comi in exchange for publishing my opinion of this book.