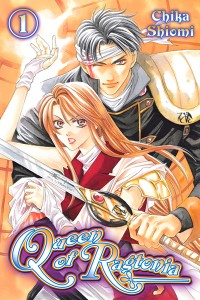 If the main attraction is a disappointment, the omake are not. Volume one includes a delightful comic about Shiomi’s Golden retriever, a dog so rambunctious he makes Marley look like a model citizen, and a brief essay describing Queen of Ragtonia’s genesis. Ragtonia, we learn, was a doujinshi that she updated for publication by preserving the story and layout while re-drawing the characters in a more contemporary style. Her essay includes several side-by-side comparisons of the original and revised pages that reveal just how closely she adhered to her first draft.

Therein lies the problem: Ragtonia would have been better served by a new script, not new artwork. The old character designs, which bear a strong resemblance to those found in Canon and Night of the Beasts, are a little dated but still attractive. The script, however, doesn’t reflect Shiomi’s current skill level, as it lacks wit, urgency, and, frankly, logic. Hardcore Shiomi fans may find Ragtonia interesting from an academic point of view — how has Shiomi evolved as an artist and storyteller? — but newcomers will find little here to engage their interest, save some pretty pictures.