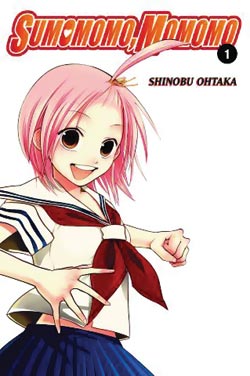 Momoko is the only child of one of the most powerful martial arts families in Japan. Since her father does not believe that she, as a woman, is capable of mastering the arts of their clan, she has been trained her whole life to become strong enough to be worthy as the wife of the world’s strongest man (deemed to be Koushi Inuzuka, son of another clan), with whom she must bear super-strong progeny.

This manga offers a very mixed bag and my own feelings about it are fairly conflicted. At times quite difficult to stomach, the book is filled with troubling fan service, unappealing artwork, grating messages, and over-the-top humor that too often misses the mark. On the other hand, the humor hits almost as often as it misses, and the story’s two main characters, Momoko and Koushi, manage to be sympathetic and even touching, despite being given some fairly unlikable personality traits.

Though I’m exceedingly uncomfortable with the story’s message that avoiding a fight is cowardly (even when standing against three humungous foes), Koushi’s inability to stand up for himself is definitely played as cowardice, and rightly so–not because of his desire to avoid being beaten up, but because of the reasons behind it. While choosing to avoid meaningless physical conflict (and the injury that comes with it) is not only honorable but just plain smart as far as I’m concerned, avoiding conflict simply out of fear of humiliation is not something anyone could successfully defend as noble. Koushi does not appear to be afraid of being beaten as much as he’s afraid of being beaten in front of the girl he likes, and it’s quite telling that the path he’s chosen instead is one which will allow him to destroy his enemies verbally rather than physically. One imagines Koushi daydreaming over his textbooks of that all-too-distant day when he will finally face his childhood bullies in the courtroom and have the pleasure of imprisoning them–perhaps even for life! These daydreams are understandable (hell, I had them all through junior high) but definitely not something to be proud of. That said, Koushi is genuinely endearing in a smart-ass kind of way. Much like Chiaki in Nodame Cantabile, he is an arrogant jerk with just enough obvious vulnerability to earn the reader’s heart. Even in his lowest moments, we root for him to succeed.

Momoko is trickier in some ways. Spunky, enthusiastic, and unfailingly sincere (occasionally to the point of becoming irritating), she might be the most genuinely likable character in the series, but her presence is made difficult to bear at times, thanks to the the series’ fanservice, which I actually found pretty revolting. I’m not usually daunted by fanservice in the manga I read, but Momoko’s character is drawn in such an infantile manner, to watch her loose, sack-like clothing constantly falling off (or creeping up) every time she makes a move is just too much, and there is at least one overly-detailed panty shot that I am still struggling to purge from my memory. On the other hand, it’s always refreshing to see such a physically strong female character in a manga series and her tireless enthusiasm is quite infectious. Even her intense devotion to Koushi, though perhaps misplaced, is undeniably sweet and quite touching.

The plot holding all of this together–a pact between two clans that not only places the fate of the world on Momoko and Koushi’s willingness to be wed, but has resulted in a series of assassins all gunning after Koushi–is only barely developed at this point and it’s too early to tell just how satisfying it might be or if it even has the breadth necessary to take these characters where they need to go. Still, there’s enough to hold my interest, at least into the next volume. Their shared situation may help bring Momoko and Koushi closer together–something I find myself already rooting for, despite my discomfort with Koushi’s childlike character design, and that alone is enough to compel me at this point.

Shinobu Ohtaka’s art is expressive and full of energy, even if it is not to my taste. Though the panels are cluttered and many of the character designs (especially of the story’s adults) are exceedingly unattractive to my eye, the action scenes are easy to follow, as is the story overall.

Despite my mixed feelings, Sumomomo, Momomo offers just enough mystery and compelling characterization to move me towards the next volume. I look forward to seeing what it has in store.

Volume one of Sumomomo, Momomo: The Strongest Bride on Earth is available now. Review copy provided by Yen Press.