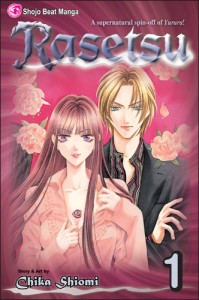 Rasetsu is a popcorn movie in manga form, a tasty mix of suspense, humor, and sexual tension with a sprinkling of supernatural elements. Though billed as a sequel to Yurara, Chika Shiomi’s five-volume series about a trio of high school students who see dead people, Rasetsu works equally well on its own terms, providing just enough background to bring newcomers up to speed without testing the patience of folks already familiar with the series’ protagonist, Yako Hoshino.

The new series catches up with Yako about eight years after the events in Yurara. Now a graduate of a prestigious university, Yako works in a library that has an unusual problem: one of its books is haunted by the spirit of its original owner, and is siphoning demonic energy from the other titles in the library’s collection. Though Yako possesses some ghost-busting powers of his own, he can’t quite exorcise the demon, so his boss dispatches him to the Hiichiro Amakwa Agency to enlist professional help. There, Yako finds a comely, if eccentric, crew of mediums: Kuryu, the kotodama specialist and resident clothes horse; Amakwa, the agency’s owner and psychic-in-chief; and Rasetsu, a smart-mouthed eighteen-year-old who bears a striking resemblance to Yako’s old flame Yurara. Through a plot contrivance that’s both amusing and ridiculous, Yako loses his gig at the library and joins the Amakawa Agency.

Enlivening the series’ demon-of-the-week plotting is the budding relationship between Yako and Rasetsu. Rasetsu, we learn, was attacked by a malicious spirit when she was fifteen. That spirit left a rose-shaped mark on her chest and vowed to return on her twentieth birthday to make her “his,” a reclamation with deadly consequences for Rasetsu. There’s an out, however: Rasetsu need only find true love before she turns twenty, a solution that’s heretofore proven elusive thanks to her abrasive personality and uncouth eating habits. It’s too early to tell if Yako will save Rasetsu from her fate, though it certainly wouldn’t be unexpected, given the strong undercurrent of sexual attraction that informs their bickering.

Of all Shiomi’s licensed works, Rasetsu boasts the best art and most accomplished storytelling. That’s hardly a surprise, given the story’s vintage; Rasetsu began serialization in Bessatsu Hana to Yume in 2006, whereas Shiomi’s other licensed titles — Canon, Night of the Beasts, Queen of Ragtonia — represent an earlier stage in her development. Though I’m partial to her High Baroque style, characterized by big shoulder pads, big hair, and unnecessarily elaborate outfits, Rasetsu has a cleaner, more contemporary feel than Canon or Night of the Beasts. The character designs are more refined, and the costumes, though stylish, no longer dominate the composition.

Shiomi’s narrative command is similarly improved. Gone are the creaky, expository passages found in Canon and Night of the Beasts, in which characters explain key plot points in excruciating detail. Instead, Shiomi shows rather than tells, using body language and wordless panels to fill us in on Rasetsu’s backstory.