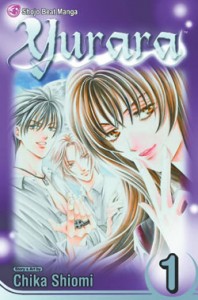 Common to all of Chika Shiomi’s supernatural thrillers are her butt-kicking heroines. Whether taming demons or hunting vampires, these unapologetically tough cookies always bag a fetching fellow, personality flaws and conflicting allegiances be damned.

In Yurara, Shiomi adds a wrinkle to her usual grrrrl power fantasy: her heroine is a butt-kicking, spirit-wasting avenger only when she’s in grievous danger; the rest of the time, Yurara is a wimpy, weepy mess who’s tormented by the sight of ghosts and tormented by her classmates, who are puzzled by her sudden emotional outbursts and erratic behavior. (How do you explain that you can’t take your seat because there’s an angry ghost already parked at that desk?) Thankfully, Yurara’s class just so happens to have two other mediums, Mei Tendo and Yako Hoshino, both of whom can see and exorcise ghosts.

Meeting Mei and Yako proves especially fortuitous, bolstering Yurara’s popularity (Mei and Yako are the class hotties) and unleashing her guardian spirit, a gorgeous, tough-talking teen who possesses Yurara’s body whenever malicious ghosts are present. Not surprisingly, Mei and Yako are intrigued by this development, with Mei, the shameless flirt, preferring Yurara in her quieter, self-doubting mode, and Yako, the brooding pretty boy, finding Yurara more attractive in assertive babe form. Yurara is flustered by their sudden interest in her, struggling to figure out which boy she actually wants to date — a problem compounded by her tendency to transform whenever she’s kissed. (If she’s in her more empowered state, she reverts to moe mode, and vice versa.) 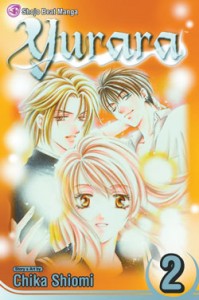 While Yurara’s premise isn’t particularly novel, I found it a nice bit of wish fulfillment: who wouldn’t want the power to transform into a more competent, attractive version of themselves when the occasion warranted? Shiomi has the good sense to exploit her set-up for laughs as well as chills, milking her awkward love triangle for all its comic potential and populating her story with some goofy ghosts. In volume three, for example, Shiomi introduces us to the spirit of Yurara’s grandfather. Thrilled to be among the living again, he dudes himself out as a seventies hipster — about the decade he would have been in his masculine prime — and swaggers through the streets of Tokyo, oblivious to the fact that only Mei, Yako, and Yurara can actually see his youthful new appearance.

Shiomi also has the good sense to make both of her male leads compelling, creating one of genre’s few isosceles love triangles. The seemingly aloof Yako demonstrates genuine vulnerability, while Mei’s aggressive flirting and himbo antics camouflage a vengeful anger, making him a more interesting character than the usual player-with-a-hidden-heart-of-gold type. Yurara, on the other hand, is far less interesting than Mei or Yako. Most of the time she’s a classic good girl: timid, polite, mildly fearful of boys (especially of the species pulchrum puer scelestus). It’s only when she channels her guardian spirit that she becomes a truly interesting character. I’d like to think Chika Shiomi is spoofing the kind of inept heroines found in magical girl manga like Fushigi Yuugi, but the series’ finale left me wondering if I was suffering from my own case of magical thinking. 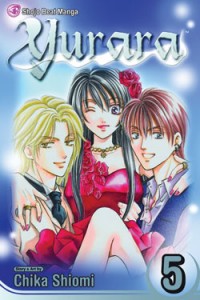 Shiomi’s art is competent, if not distinguished. Like Fumi Yoshinaga, Shiomi has a limited repertoire of character designs — tall boy with short hair, tall boy with messy hair, wide-eyed heroine with bangs — that she uses in all of her stories. Yurara’s guardian spirit, for example, looks like a leaner, meaner cousin of the Queen of Ragtonia’s heroine, while Mei bears a strong resemblance to Sakaki, the vampire anti-hero of Canon. That said, Shiomi’s characters are stylishly drawn, with sharp, chiseled features, expressive faces, and smart outfits — no one ever has a bad hair or clothing day in one of her stories.

At five volumes, Yurara sometimes feels a little rushed; I wish that Shiomi had explored both sides of the heroine’s personality in greater depth. The final volume, in particular, has a hasty feel, as Shiomi labors mightily to tie up loose threads with a conclusion designed to satisfy Mei and Yako partisans alike. That she succeeds without resorting to an unabashedly happy ending is testament both to her skill as a storyteller and her deep respect for teenage girls’ intelligence.