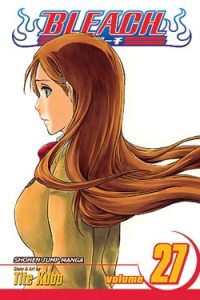 Volume 26 ended with Arrancars invading Karakura Town and everyone rushing in to protect it, including Orihime, who was forced to take her own human-friendly route back from Soul Society instead of traveling with Rukia. As it turns out, the attack was waged with the sole purpose of isolating Orihime whose unusual healing power has caught Aizen’s interest, so that she can be abducted away to his headquarters at Hueco Mundo. Orihime is given twelve hours (and an invisibility bracelet) to put her life in order before she must acquiesce, with her friends’ lives on the line. She is also allowed to say goodbye to one person, provided she is undetected, and the scene in which she does that is one of the best and most touching in the series so far. Meanwhile, Soul Society must regroup in order to face the threat of the Arrancars—which is more immediate than they’d calculated—and Ichigo and his friends are ordered to abandon Orihime, who has been labeled as a traitor, and join them in their preparation.

This really is one of the strongest sections of this entire series, and the fact that it comes so far in demonstrates more storytelling skill than Tite Kubo is generally given credit for. This volume contains even fewer outright battle scenes than the previous, but the atmosphere is fraught with tension throughout and quite a few of the main characters are given the opportunity to shine, particularly Orihime, Rukia, and Ichigo. That there are numerous (perhaps endless) battles to come over the next few volumes seems inevitable, but the stakes are high enough to promise a major dramatic payoff for those who see this arc through to the end.